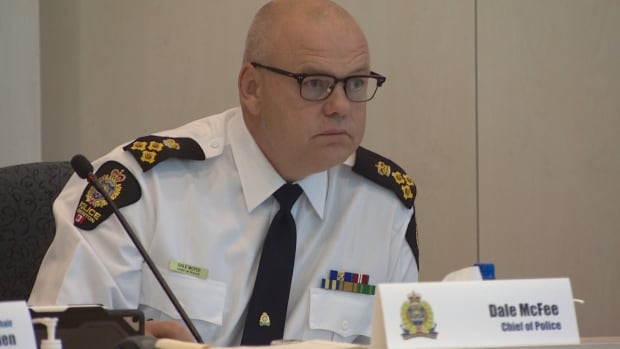 Edmonton police are pledging to better engage with communities who experience discrimination or marginalization by  law enforcement through a new Chief’s Community Council.

The council, announced Monday, will work directly with the Edmonton Police Service (EPS) on changes to policy, procedure and operations. The advisory group will consist of people who have experienced marginalization, racism and discrimination, along with community and business partners.

Police also announced plans to better engage with communities around Edmonton to create safe spaces for extensive conversations about how law enforcement can improve public safety.

Chief Dale McFee said the actions are necessary to improve relationships with Black, Indigenous and other communities.

“Today, we begin a new chapter of ongoing relationship building with these communities,” McFee said.

“I understand the skepticism some might bring to a statement like that. What makes this different from previous efforts is that this is not a listening campaign, it’s not a campaign at all. It will not end. This is part of our everyday work today and moving forward.”

EPS held the first community engagement sessions recently, and said the response was powerful and promising. More sessions will be held around through 2021.

The council will visit 50 communities over 15 months, McFee told CBC Radio’s Edmonton AM  on Tuesday.

“I think everybody, quite frankly, over the last number of years is just tired of talking,” he said.

“I’ve sat through enough of these inquiries and inquests throughout my career to know there are a lot of things we need to do as a collective group, as a community and as a police service, and it’s time to start taking some action. It’s not time to form another committee to study things.”

Edmonton’s Police Service is pledging change after a summer of protest and public hearings demanding that Black and Indigenous lives matter. We’ll hear from the chief and an official leading the work. 7:15

McFee said police already know what is driving crime in many areas the community council will visit.

“We’ve got two elements of crime in these communities,” he said. “We have a high rate of violence, which is actually unacceptable, and we have a high rate of social issues, which disproportionately drive our calls for service. They are not the same solution and it’s important we differentiate.”

He said the police service can come out of the community council meetings with four or five things it can do right away.

The efforts will be supported by what EPS calls its value and impact division, headed by Enyinnah Okere.

Monday’s announcement came after city council held virtual public hearings in June about the future of policing. At those hearings, some people called for council to divert police funding into community programs.

The Edmonton Police Service announced plans to introduce a new Chief’s Community Council to work directly with the service on changes to policy, procedure and operations. 2:00

In summer, city council approved an $11 million budget cut for next year. The overall EPS operating budget was $373 million in 2020.

Police forces around the world have faced increased scrutiny this year with accusations of over-policing racialized communities in the wake of George Floyd’s murder by a Minneapolis police officer.

McFee’s statement is a step in the right direction, said Temitope Oriola, a professor of criminology at the University of Alberta.

Oriola said engagement shouldn’t be seen as a solution itself and shouldn’t be needed to end police practices such as carding, where research already shows racialized groups are disproportionately targeted.

“That’s something that’s within the authority of the chief in this minute, in this second to do,” Oriola said.

“I appreciate his approach is very different from previous approaches, very empathetic, very approachable. But it doesn’t address the most immediate and pragmatic steps that can and ought to be taken on the order of the EPS chief.”

Dunia Nur, president of the African Canadian Civic Engagement Council, said she’s hopeful about the new committee, but counts herself among its skeptics.

Nur advocated for and helped create an anti-racism advisory committee to work with the City of Edmonton. But she was disappointed in how the committee was structured.

For the new council to succeed, Nur said, it should include Black people with lived experiences of over-policing and structural violence, and people with expertise on the justice system and on how public safety differs for different communities.

She said she also hopes the council will form concrete plans for EPS that reflect what communities are asking for, which is often public safety.

“Is this a committee that can really hold police accountable and be courageous enough to ensure that the recommendations the community puts forth can be moved forward in a way that is transparent and authentic?” Nur said.