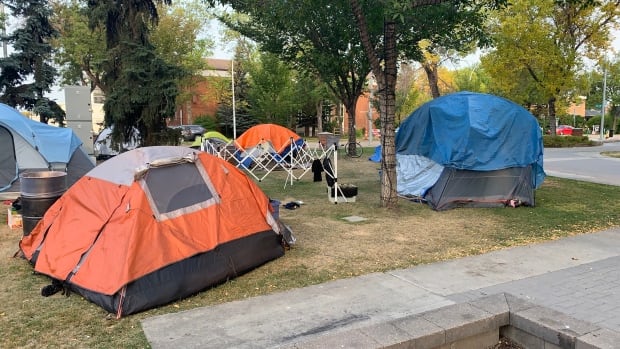 The City of Edmonton says it has reached an agreement for organizers of an encampment to voluntarily pack up and leave a park in Old Strathcona by Monday.

The Peace Camp at Dr. Wilbert McIntyre Park was set up earlier this month to raise awareness about the need for supportive housing and a safe supply of drugs to prevent overdoses in the Old Strathcona area.

The encampment’s organizers were originally told by to leave by last Friday, but instead the city “engaged the organizers in further discussions to facilitate a peaceful closure of the camp,” the City of Edmonton said in a news release Monday.

The city says it reached an agreement with organizers to remove the camp by Monday.

“We look forward to a peaceful and voluntary closure of the camp by the organizers,” said Rob Smyth, deputy city manager of citizen services in a news release. “The city empathizes with those living outside. Our ultimate solution is for every Edmontonian to have a home. In the meantime, 24/7 shelters have spaces available to support people while they take steps forward on their path to housing.”