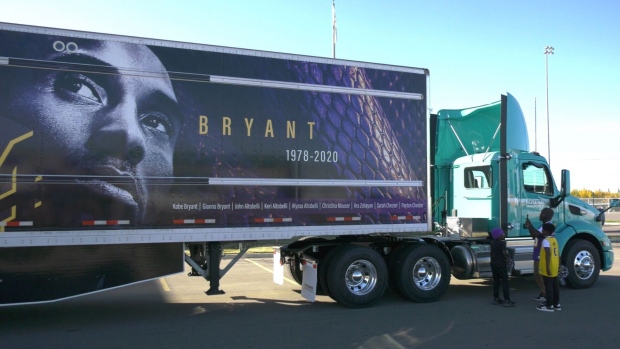 EDMONTON — A tribute for NBA legend Kobe Bryant is on display in Edmonton.

Bryant, a five-time champion, died in a helicopter crash in California in January. His daughter, Gigi, and seven other people were also killed.

A trailer covered with a photo of Bryant and his daughter, as well as his logo and the names of all the victims, stopped at the Roseneau Transport parking lot Friday.

“So the message here really is to show what Kobe Bryant did for the community, what the effects of the tragic death that has happened in January,” said Roseneau Transport marketing specialist Thomas Ancheta.

One family of Lakers fans observed the tribute wearing purple and gold.

“This is beautiful, this is great,” said Yoofi Hagan. “What they did, the tribute for Kobe, Gigi and all the other people with their names, it’s beautiful.”

The Edmonton Stingers’ CEBL trophy was also on display.

The truck has made stops in Toronto and Winnipeg.