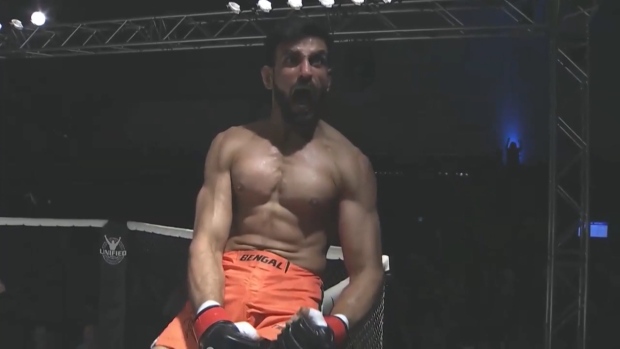 EDMONTON — An increase in UFC fights during the pandemic has been a huge boost for two local fighters, including one about to make his debut in the octagon.

Tanner Boser has been having a banner year in the UFC. The Edmonton-based fighter has had two knock-outs in 28 days, putting him in the Top 15 ranking for heavyweights.

He’s been able to capitalize on the UFC’s packed schedule taking fights on short notice during the pandemic.

“I’ve got nothing but praise for it because it’s been beneficial to me,” said Boser.

Boser is currently quarantining in Las Vegas before making another trip to Fight Island in Abu Dhabi where his friend and training partner is about to take a major step.

“It’s creating more opportunities for the guys that are hungry and just want to compete,” said Bhullar.

He’s compiled a record of 8 and 0, but there was a time when he walked away from fighting all together.

Bhullar was in the corner five years ago when his younger brother Kenney suffered severe facial fractures during his amateur debut. Kenny kept fighting, Bhullar blamed himself and vowed to quit.

“I was covered in my brother’s blood… it was a traumatic experience. It really bugged me for a long time,” said Bhullar.

Bhullar’s family and friends convinced him to return. He recently travelled to Abu Dhabi to work in Boser’s corner and now the heavyweight is returning the favour for Bhullar.

“Yeah, I’ve got to be sharp and I’ve got to be zoned in. It’s a big deal. It’s his entire future and livelihood and stuff like that, but I’m not the one in the cage,” said Boser.

“I want him here because he understands my game,” said Bhullar.

Boser’s next fight is against UFC legend Ander Arlovski in November. But for now he’s backing up Bhullar, who says he’s not intimidated to enter the UFC octagon for the first time.

“Everyone talks about bright lights. The lights are bright in other cages too,” said Bhullar.