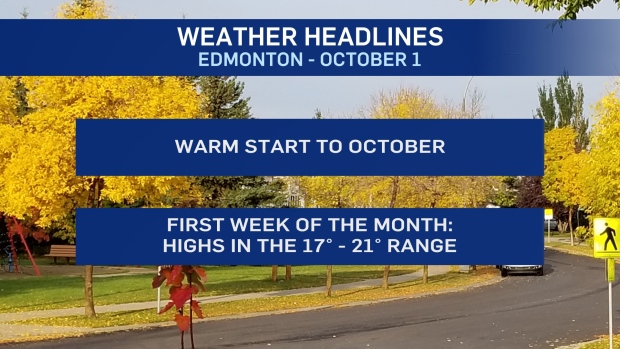 EDMONTON — It’s shaping up to be the warmest start to October since 2010 in Edmonton.

That’s the last time we had an average high of 19 degrees through the first week of this month.

We should be right around that mark again this year as daytime highs are forecast to be in the 17 to 22 degree range right through to early next week.

An upper ridge will dominate the weather pattern over the next few days, keeping most of the province warm and dry.

The exception is NE Alberta, where we’ll get some cloudy days with a chance of showers.

Clouds are pushing across most of the province this morning.  Those clouds and some wind have prevented temperatures from dropping below zero in most areas.

That’s not to say ALL of central and western Alberta has avoided frost.  But, most of the weather stations have stayed above zero.

It’s a different story in eastern Alberta where temperatures ARE below zero by a few degrees this morning.

Edmonton and areas to the south and west will get some clearing this afternoon and temperatures will climb quickly.

We should get to about 18 degrees in Edmonton today while parts of west and NW AB get into the low 20s.

The warmest temperatures are still to come as Edmonton and area gets into the low 20s Sat/Sun/Mon.