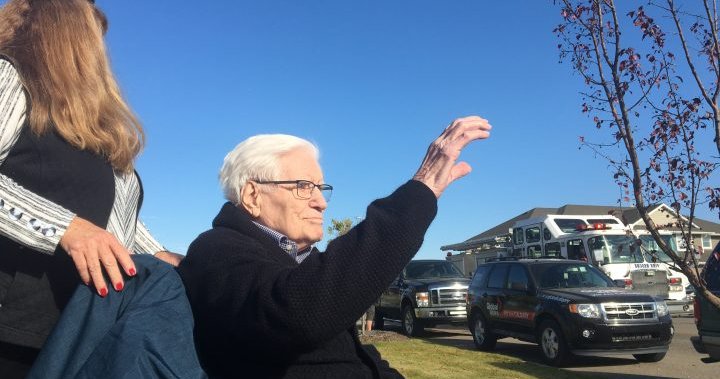 A surprise birthday parade was held in Red Deer on Saturday to honour one of Alberta’s last surviving Second World War veterans.

Tommy Baker was just 18 years old when he trained at Mewata Armoury in Calgary. He was shipped overseas to join the war in Europe in 1941.

Baker’s first tour of duty was the Raid on Dieppe, a battle that cost over 900 Canadian lives.

He went on to fight in Italy where he suffered shrapnel injuries and was sent to North Africa for medical care.

Now, at his home in Red Deer, he reflects on his fellow veterans no longer here.

“There’s not too many of us left now. I’m sure [that number is] going down, now that they’re all getting near 100,” Baker said.

Tommy turned 97 on Saturday. He was expecting a little get together with family and a few friends.

He had no idea about what was planned for him by members of the King’s Own Calgary Regiment — the unit Baker was in during the war.

“The Second World War veterans have always been really important to me,” said retired major Patricia Murphy, president of the King’s Own Calgary Regiment Association.

“My dad was a Second World War vet. He died just after my seventh birthday, so I was never really able to pay my respects to him for what he did. So it has translated now to trying to do the best I can for the Second World War vets from our regiment who are still with us.”

A parade of reservists and first responders in their vehicles circled around Baker’s home while dozens of people wished him well.

The sight of military vehicles brought back vivid memories for Baker from nearly 80 years ago.

Murphy said it was inspiring to see so many police, RCMP, EMS and military members taking part in the parade.

“I looked and my eyes filled with tears. There are so many of them, they are excited about it and they all want to be there. They all want to be a part of this to honour Tommy for what he did those many years ago,” Murphy said.

Both Baker and his daughter said they were overwhelmed by the huge surprise tribute.

“It’s pretty special to think that so many people care about an older veteran and one of the few remaining ones,” Sandee Baker said.

Sandee said her dad taught her “you can do whatever you set your heart to.” She hopes others can learn from the example of veterans like Baker who sacrificed so much.

“Gentleman from World War II and the young men that are involved in war today, they write a blank cheque, right up to and including the cost of their lives. I’m not sure that, as a country, we give enough credence to that,” Sandee said.