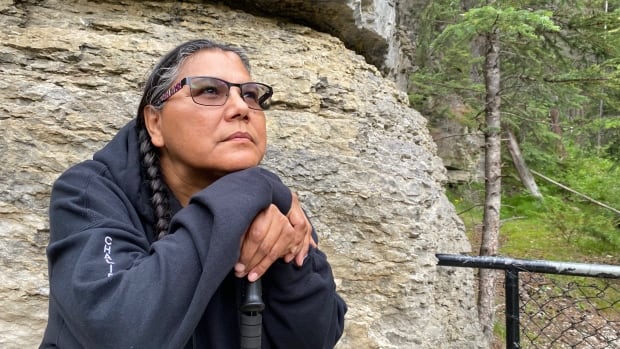 An annual walk to honour missing and murdered Indigenous women and girls will bring together communities around Lesser Slave Lake and, for the first time, include police.

The Sisters in Spirit Walk happens annually across Canada, but this year Driftpile Cree Nation has invited officers from Lakeshore Regional Police Service to join them.

“We have to join hands, we have to get these cases looked at. The only way to justice is through the police,” said organizer Nancy Chalifoux. “It’s the beginning of a better relationship.”

Police say strengthening their relationship with the community is a priority for them.

“It’s very important to stand with the communities in events like this,” Insp. Dean Syniak told CBC News Friday.

‘It just got swept aside’

For Chalifoux, the significance of a new beginning has deep roots. She still has no official answers after the body of her mother, Angeline Willier, was found in a ditch deep the bush near Swan Hills, 100 kilometres south of their community, in 2001.

“The RCMP ruled it an unexplained sudden death; she was lost picking berries,” Chalifoux said. “There were no berry containers in her truck.

“In her truck what the family found was a blood smear, an ashtray full of cigarettes — my mother did not smoke. And somebody had recently changed the tire, and she was in no condition to change a tire. She was 72 years old with a metal plate in her leg and she was still using a walker.

“And it just got swept aside, like, ‘Oh she was just lost picking berries.’ And that was the RCMP, that was the extent of their investigation.”

Eleven years later, when remnants of Willier’s wallet were found under an old shed, police launched an extensive investigation, Chalifoux said. That’s when she realized the initial investigation wasn’t serious, she said.

“But it’s 11 years later. People have passed on. So it remains unsolved. We need to encourage people to break the silence. That’s the only way we’re going to end this violence,” Chalifoux said.

“Unfortunately for the family, there were questions that were not answered back in 2001 that remain unanswered today,” he said. “This includes other factors and considerations that was out of our control.  The family had to live through this twice and go through the confusion and stress as they initially did. This is one of the most difficult things. Ever.”

For Chalifoux, it’s the reason she now encourages families of missing loved ones to immediately post their concerns on social media.

“It took me 17 years to find my voice. Now I’m willing to speak for others,” Chalifoux said. “I don’t want to see other families go through what we went through. I want to make sure an investigation actually occurs.”

Chalifoux is among many members at Driftpile who have formed a group to support each other through the trauma and grieving of the missing and murdered.

As they walk from Slave Lake to Driftpile to High Prairie, performing ceremonies in each community, they’ll pass along a symbolic red dress as a torch.

The dress itself has its own special story. It was designed based on a dream.

“A young man had a dream about a red dress and when we hold this dress up it looks like blood is dripping from it,” Chalifoux said.

The walk, which will follow Alberta Health guidelines around COVID-19, begins Sunday at 10 a.m. in Slave Lake.