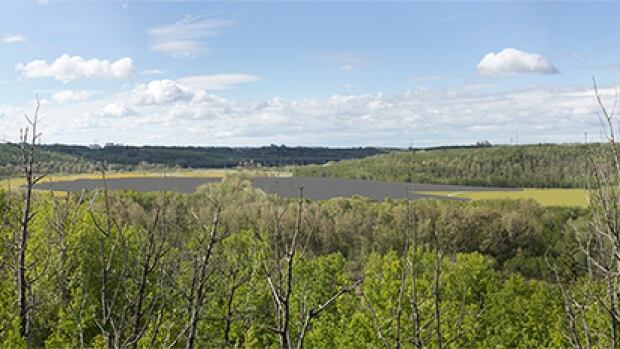 Epcor will again ask the city of Edmonton for the land zoning change it needs to build a controversial 51-acre solar farm next to its E.L. Smith Water Treatment Plant, in a southwest section of the river valley.

The project near the Cameron Heights neighbourhood has been opposed by both environmental and First Nations groups in the last four years. Now, Epcor only needs this city zoning change to begin construction.

Kristine Kowalchuk, chair of the Edmonton River Valley Conservation Coalition, will speak out against the project during a public hearing at city council Tuesday.

“The river valley is not the place for unnecessary industrial activity,” Kowalchuk told CBC radio’s Edmonton AM. “Solar projects shouldn’t destroy this land. If they do, they’re not actually a green project.”

Kowalchuk said one of her concerns is that putting solar panels so close to the river could harm birds.

“Water birds mistake these solar arrays for water and they will try to land on them,” Kowalchuk said. The birds often injure themselves on the hard surfaces, and they may not be able to fly away since the solar panels will be enclosed by a high fence, she said.

Epcor makes the case that building the solar farm right next to the water treatment plant, on land it already owns, is the best option.

Edmonton AM6:38EPCOR’s bid for a solar farm in the river valley faces opposition

EPCOR wants to put a solar farm in Edmonton’s River Valley. We’ll hear from one group that will speak against the project at a city hearing tomorrow. 6:38

The company has listened to concerns from stakeholder groups, said Craig Bonneville, director of the E.L. Smith solar farm project and director of the Gold Bar Wastewater Treatment Plant.

He said Epcor has already reduced the footprint of the original plan by almost 20 per cent. The new plan leaves an additional 125 metres of space along the riverbank for wildlife to pass through. The company is also using cameras to monitor wildlife in the area, he said.

“That monitoring will continue through construction and the operation of the solar farm,” Bonneville said.

Kowalchuk said these concessions are not enough to win her approval. She is in favour of solar projects, but would prefer to see Epcor add solar panels to rooftops, or use space in landfills or on brownfields.

“We’ve heard from a lot of Edmontonians who are enraged by this proposal,” she told Edmonton AM.

However, Bonneville said the solar panels have to go next to the E.L. Smith Water Treatment Plant because Epcor wants to install a battery system that could power a smart grid at the plant.

This would allow Epcor to store solar energy and use it during power outages or during high-use times when electricity is more expensive.

“For the battery to work, it has got to be connected to the load, to the water treatment plant itself, or it wouldn’t provide those benefits,” Bonneville said.

Edmonton councillors held four days of public hearings for the zoning change in June 2019. At that time, council ultimately voted to put the zoning decision on hold after the Enoch Cree Nation opposed the project.

The E.L. Smith Water Treatment Plant and the proposed adjacent land is on a site once used by the Enoch Cree Nation. Archeological artifacts dating back as far as 9,000 years, including stone tools and arrowheads, were found on the proposed site.

However, Epcor and Enoch Cree Nation signed a memorandum of understanding last month.

Epcor already has approval for the project from city administration, the Alberta Utilities Commission and Alberta Culture and Tourism.