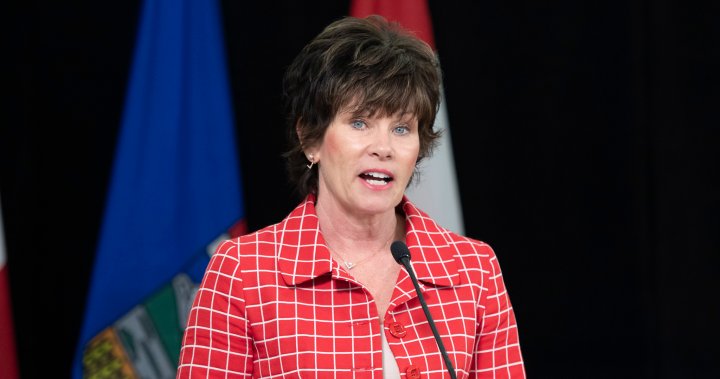 Sonya Savage said the United Conservative government plans to bring in legislation this fall to set the stage for further development of geothermal energy, which comes from heat beneath the earth.

Water or steam can carry the energy to the surface to be used for heating or creating electricity.

“We see this as a stand-alone opportunity to bring in a new sector to drive investment,” Savage told a news conference Wednesday.

“It has the added advantage of being green and clean and non-emitting, which feeds into the narrative that Alberta is taking emission reduction seriously.

“We’ve got the potential here and we want to develop it. Nobody’s walking away from oil and gas. Oil and gas will continue to dominate the energy mix for decades.”

Savage said pilot projects in the province are underway to check the commercial viability of geothermal technology. Everything is being done on a case-by-case basis.

“The lack of clear rules and a clear and certain regulatory regime has been somewhat of a barrier for the industry,” she said.

Savage said the legislation will be developed with input from energy companies as well as landowners. She said the industry can also use existing oil and gas wells to assist in the extraction of geothermal energy.

In a 2016 report, the Canadian Geothermal Association estimated that Alberta has 60,935 wells with bottom hole temperatures greater than 60 C, which is hot enough to heat homes or grow fresh produce in a greenhouse.

“The ability of geothermal development to repurpose inactive oil and gas sites have great potential. Reusing the existing infrastructure can significantly limit additional impacts on the land while also facilitating investment,” she said.

The chair of the Canadian Geothermal Energy Association said it could be the energy system of the future.

“Geothermal is the perfect example of one such bridging opportunity, because it draws on the skills of our people, the potential within the earth, and the aspirations of a low-carbon emissions future,” said Alison Thompson.