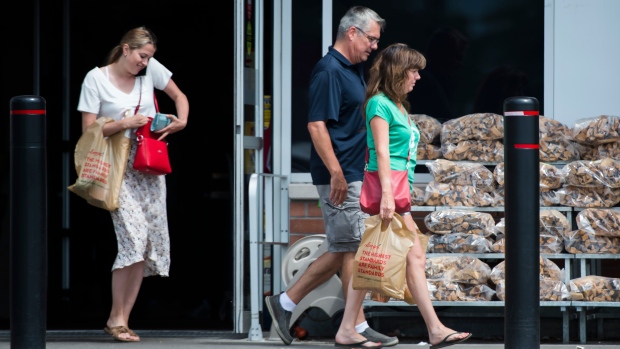 OTTAWA — Under the newly-unveiled list of single-use plastics being banned in Canada, plastic grocery bags, straws, stir sticks, six-pack rings, cutlery and food containers made from hard-to-recycle plastics will be out of use nationwide by the end of 2021.

Environment and Climate Change Minister Jonathan Wilkinson announced the federal government’s next steps towards its plan to achieve zero plastic waste by 2030.

“When a ban comes into effect, your local stores will be providing you with alternatives to these plastic products,” Wilkinson said, adding that he knows it’s hard to come back from a trip to the grocery store without single-use plastic products, especially food packaging, but that “has to change.”

As first pledged last year, and re-committed in the Liberal’s September throne speech, the government is moving ahead with banning certain “harmful” single-use plastics that are consistently found in the environment and for which there are readily available alternatives, while finding ways to make sure more plastic is recycled.

Citing the need to consult, the government will be soliciting feedback on a “discussion paper” until Dec. 9. The finalized new regulations wouldn’t come into effect until the end of 2021.

In the spring, Wilkinson signalled that the ban on single-use plastics may be delayed because of the pandemic. By the summer, a Canadian report found that public support for a crackdown on certain products was dwindling as the majority of those surveyed said they liked the health and safety protections associated with disposable plastics over reusable alternatives.

Recognizing the ongoing need for single-use plastic personal protective equipment items like face shields, the federal government says the ban will not impact access to PPE, or other plastics used in medical facilities.

However, the government has been discussing the pollution impacts of the increased use of many disposable products during the pandemic and says it’s working with the provinces and territories on plans to properly dispose as much of it as possible.

“We’re also investigating solutions to recycle PPE where it is safe to do so, and options to make some of the PPE biodegradable,” Wilkinson said.

However, due to the pandemic and ongoing health restrictions, many restaurants have had to pivot to take-out meals and are providing customers with plastic cutlery, and it remains to be seen what kind of financial impact this looming ban will have on these businesses.

The environment minister said the government selected these items because there are already readily-available and affordable alternatives, and that while many items will have to continue to be single-use, they need to be items that can be recycled.

“In the context of takeout, the focus is really on polystyrene which is a very difficult substance to recycle and it is one that we find quite widely in the environment. Many, many of the restaurants that do takeout have already transitioned away from polystyrene to other forms, whether it’s cardboard or different forms of paper, which are recyclable,” Wilkinson said.

“At the end of the day, Canadians expect us as governments to take action on an issue that they know is an important one… and to be honest with you, Canadians are far ahead of their governments on the plastic issue they’ve been demanding this kind of action for a long time,” he said.

When the ban on single-use plastics was first announced, the federal government said it would be focusing on holding big companies responsible for their plastic production, requiring them to play a part in collecting and recycling their materials.

Wednesday’s announcement includes a proposal to establish recycled content requirements in products and packaging, which the federal government says will spark investment in recycling infrastructure and innovation in technology to extend the life of plastic materials to keep them in the economy, and out of the environment for longer.

Later this week, the federal government will be publishing a proposed order to add “plastic manufactured items” to the list of regulated products under Canadian Environmental Protection Act, 1999 (CEPA). Greenhouse gasses is among the items already on that list.

According to the federal government, Canadians throw away three million tonnes of plastic waste a year, and only nine per cent of that gets recycled, and about one-third of the plastics used in Canada are for single-use or short-lived products and packaging, including up to 15 billion plastic bags used every year and close to 57 million straws used daily.