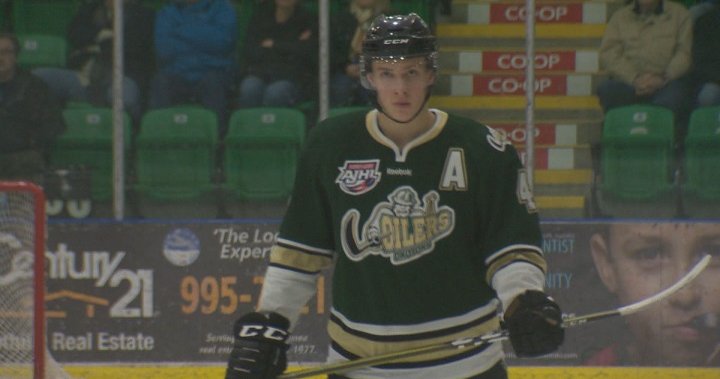 The 2020 NHL Draft began with commissioner Gary Bettman stating that Jan. 1 is the new target date to begin the 2020-21 season. Then, the real games begin.

“He can skate. He’s a big man. He can play left wing and centre,” Holland said. “We have to get more jump. I like that he led the Alberta junior league in scoring at 17. That’s hard to do.”

No stranger to Alberta, Holloway spent two seasons with the Okotoks Oilers of the AJHL, scoring 40 goals and 88 points in 2018-19 and earning a scholarship to the aforementioned Badgers program.

Holland said he had no preference about selecting out of college, Europe or major junior.

“All the players are so educated. I think there’s a benefit to any different direction whether it’s junior, college or Europe,” Holland said. “We’ve got a young man from Alberta. He’s played in the AJHL. We’ll see what kind of year he’ll have at Wisconsin.”

On the international stage, Holloway represented Canada at the World U-17 and U-18 tournaments and was invited to Team Canada’s selection camp for the 2020 World Junior Championship.

Holland said he was open to moving the 14th pick, but “the phone never rang.”

“We had our ranking, and when it came to our pick, we picked the player we liked best on the board.

Rounds two to seven of the NHL Draft are set for Wednesday, Oct. 7. The Oilers have until the beginning of the third round to decide whether the 76th overall pick will be sent to Calgary to complete the James Neal-Milan Lucic trade from last July.

Ken Holland is without second- or fourth-round picks entering Day 2.