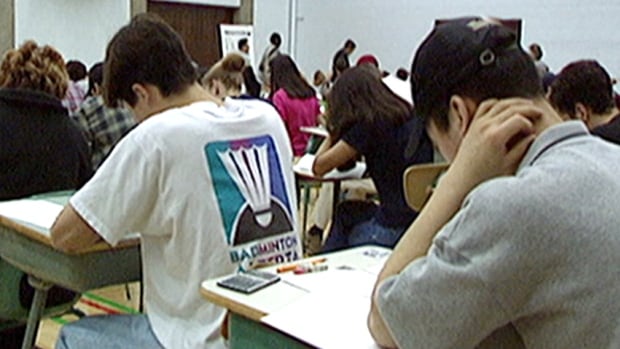 Edmonton Public Schools will ask the province to suspend diploma exams for high students in the 2020-21 academic year, the board agreed unanimously at a meeting Tuesday.

Board trustees said requiring students to take the provincially-administered tests would add pressure to an already stressful learning environment in the COVID-19 pandemic.

Trustee Shelagh Dunn suggested the move in a motion Tuesday.

Even though the province aims to return to near-normal learning, Dunn said this year is nowhere near that.

“I believe it’s unhealthy to act as if things are normal when they aren’t,” Dunn said when presenting the motion. “It could be a recipe for fatigue, exhaustion and burn out.”

Dunn noted the potentially complicated situation of students and staff needing to self-isolate during exam time.

“We need to find a way to relieve some of the pressure and stress within the system and focus on mental health and well-being,” Dunn said.

The diploma exams are given to assess a student’s achievement level in core Grade 12 courses and ensure province-wide achievement standards, the government website says.

The standardized test, usually offered five times a year, was cancelled in March when the pandemic started.

They’ve also been cancelled during catastrophes like the 2016 Fort McMurray wildfire and the flooding in Calgary in 2013.

With nearly 30 per cent of students learning online, it’s still unclear how the province would administer the tests, normally given in large groups in gymnasiums.

Estabrooks pointed out that students opting to learn from home are doing so to cut out the potential exposure a classroom environment might present.

“To ask them to come in and write a mandatory diploma exam in person, is going against the very choice that truly is the strength of our re-entry plan,” Estabrooks said.

Estabrooks also mentioned the added stress and effects on mental health for both staff and students.

“We heard very clearly that parents wanted a return to regular assessment for their children,” Aitchison said in an email to CBC News Tuesday.

Aitchison referenced a survey by Alberta School Councils’ Association that found nearly 65 per cent of parents favoured a return to regular assessments.

“That said, we are always exploring options to make this return to in-person learning as smooth as possible and we will make adjustments to the school re-entry plan as required,” he added.

But Estabrooks noted that that survey was done in May.

“I think that survey was a moment of time and certainly that reflected the sentiments of parents across the province,” Estabrooks said during a video news conference.

“A lot has happened since May,” she added.

Estabrooks said the province hasn’t presented a plan to accommodate on-line learners during the exams.

Aitchison said school divisions are responsible for administering the exams and coordinating with their students and families.

Trustees agreed school grades this year would be difficult to compare to previous years.

“I think we can all agree that the marks that are awarded this year need to come with a disclaimer,” Estabrooks said.

The EPSB motion includes asking the province to postpone provincial achievement tests, given to students in junior high.

But Aitchison said administering PATs is optional this year as outlined in Alberta’s school re-entry plan so individual school authorities have the ability to decide if they will administer PATs.