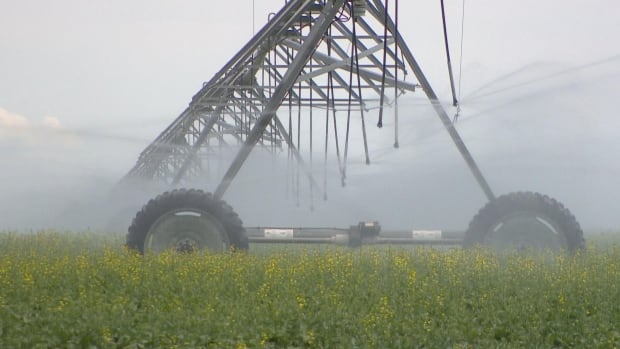 Alberta will see $815 million flow into new irrigation projects — including the relocation of existing canals underground — in the coming years.

The investment announced Friday is a partnership between the irrigation districts, the province and the Canada Infrastructure Bank.

The bank will offer a $407-million loan to the districts, which will put $163 million of their own funds into the projects. The province will contribute $245 million.

Water storage will be increased by creating four off-stream reservoirs.

The money from the infrastructure bank is part of $1.5 billion announced last week for water projects across Canada.

The bank is investing a total of $10 billion across the country as part of a federal recovery plan.

“Today, we are here to celebrate a good news day that is much needed,” said Premier Jason Kenney on Friday.

“In this tough year, agriculture has been a real bright spot.”

A recent economic forecast from ATB Financial pointed to agriculture and agri-foods in the province as one of the sectors that has grown during the pandemic, noting crop yields are expected to be high this year.

Kenney said the investments will create 1,300 construction jobs in the near term, and 6,800 permanent direct and indirect jobs.

“This investment is both a tremendous source of good jobs that are desperately needed right now and a slam dunk in one of our most important industries,” he said.

But he also couldn’t help but take a swipe at Canada’s fiscal relationships, a favourite target, following a remote appearance by federal Infrastructure Minister Catherine McKenna where she listed a number of investments already made in the province.

“It’s always a great day to see even a small bit of our contributions to the rest of Canada coming back to help Alberta,” he said.

Agriculture Minister Devin Dreeshen said there will be no new water allocations required for the projects, an important point in southern Alberta, where allocations have been suspended for years.

Michael Sabia, the board chair of the bank, said the investment should drive more private investment in agriculture in Alberta and said the bank is looking at more investments across sectors in the province.