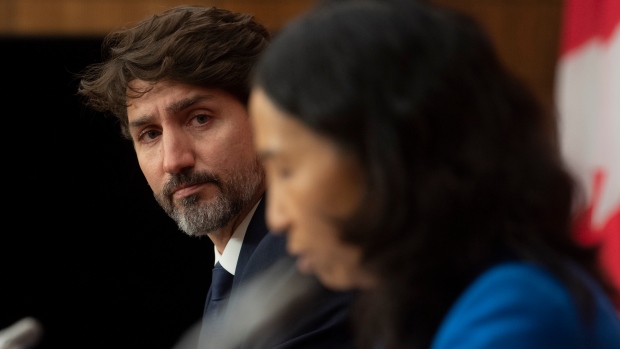 OTTAWA — By next week Canada could see thousands of new COVID-19 cases diagnosed, hitting a total of 197,830 COVID-19 cases nationwide and up to 9,800 deaths, the latest federal modelling on the short-term trajectory of the pandemic shows.

“We’re at a tipping point in this pandemic. Not only is the second wave underway, yesterday we hit the highest daily recorded cases, well above what saw this spring,” said Prime Minister Justin Trudeau. “We flattened the curve before, we can do it again.”

The updated national picture on the severity of the second wave of COVID-19 shows that “a stronger response is needed now,” according to the report issued by Health Canada.

Asked about why the federal government is not stepping in to make sure stronger actions are taken by provincial governments like using the Emergencies Act, Trudeau defended the federal response, citing the different realities across the country.

“We’ve seen tremendous variances in effectiveness of various measures and in population behaviors,” he said. “Let’s make no mistakes about it. The second wave is really frustrating for a whole bunch of people who’ve been through this spring and who don’t want to see this happen right now. A whole bunch of us would love to see this simply go away, well it will only go away if we all do our part.”

The modelling comes after the country has already blown past the September estimates for new cases and deaths by this time.

As of the time the modelling was released, there were 177,600 confirmed COVID-19 cases, 18,755 of those are currently active, and to-date there have been and 9,583 deaths. Those numbers have since continued to increase.

“Living through a global pandemic has not been easy on anybody, and our lives have all been disrupted and upset. We’ve all had to change and adapt so much. Families have been strained, people have lost jobs, we’ve had to let go of celebrations, change our plans and forego seeing our loved ones,” said Health Minister Patty Hajdu. “And of course far too many lives have been lost and COVID-19.”

The new data shows that, if Canadians maintain their current rate of contacts, the epidemic will resurge as rates of infection are already accelerating rapidly in Quebec, Ontario, and Alberta, while the pandemic remains largely under control within the Atlantic bubble.

As has been the case over the last month, the rate of hospitalization is increasing, but now what was a lessened rate of deaths from the virus is also trending up once again. The second wave is hitting younger age groups harder than other demographics, the data also shows.

However, the latest data also shows a “concerning rise” in new cases among individuals 80 years of age and older, who are at the highest risk of severe outcomes.

Across Canada there have been 250 schools with COVID-19 cases, and there continues to be a growing number of outbreaks in long-term care homes, though not yet as many as were seen in the spring.

“If strategic closures are needed to reduce contacts between individuals, results of dynamic modeling shows us that acting fast, will have the greatest impact,” said Chief Public Health Officer Dr. Theresa Tam.

Canada’s top public health officials are speaking to the new figures, as Ontario has rolled out new restrictions and is urging people across the province to stay home except for essential purposes in certain hard-hit regions that will restrict indoor dining and close gyms after that province broke a record for the largest daily increase in cases since the pandemic was declared.

Tam extended this recommendation to Canadians nationwide about their behaviour over the next few weeks, as the country is told once again that the curve needs to be flattened to have a chance at a somewhat normal winter holiday season, after weeks of growing case counts and a minimal reintroduction of regional restrictions.

“What we do now will shape the numbers we see in two weeks, and set us hopefully on the right track for family gatherings at Christmas. So let’s work together,” Trudeau said.

Deputy Prime Minister and Finance Minister Chrystia Freeland also detailed the new plan for businesses in terms of what their second wave financial supports will look like should they be forced to close due to a pandemic-related public health order.