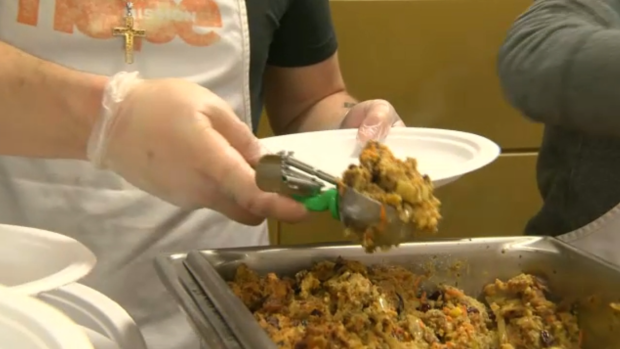 “I got here early because I knew there would be a really big lineup,” said Ken Hamilton, who was among the first people in line.

Homeless for the past three years, Hamilton would typically spend his Thanksgiving inside the facility, pulled up to a table, in a warm dining area. But not this year. Not during a pandemic.

“Hey, it’s not that bad,” remarked Hamilton, who estimated he’s been tested for COVID-19 between 15 and 20 times at various service facilities across Edmonton. All negative results, he said.

Inside Boyle Street, in what would normally be filled with tables and chairs, a few volunteers wearing masks formed an assembly line, dishing out turkey, potatoes, and fixings (prepared by NAIT culinary staff) into plastic takeout containers to give to the people lined up outside.

“The comradery,” said Led Umpherville, a volunteer since 1988, when asked what’s missing this year.

“You don’t’ have all the people inside the building talking to you and everything else.”

But he acknowledged, it’s far better than the alternative: Cancelling it altogether due to COVID-19.

“I would be lying if I said the thought didn’t cross our minds, like, should we just cancel this year? But I think quickly, looking around at the need that’s out there, looking around at the state of the province and our city and what it’s looking like, we knew that that just wasn’t an option”, said Dowling.

According to the City of Edmonton, there are approximately 2,000 people experiencing homelessness in Edmonton, a number that’s increased by 200 since the pandemic began. It’s estimated 600 sleep on the street each night. On Friday, the City announced plans to convert the Edmonton Convention Centre into a temporary homeless shelter to help address the problem, which has materialized into encampments in Strathcona and Rossdale in recent months.

“We really applaud the city for making the efforts that they are to serve the homeless community. The reality is there are no easy solutions,” said Major Al Hoeft, spokesperson for Salvation Army, which also hosted a takeout-style turkey dinner for 150-200 of Edmonton’s homeless population on Sunday.

At Boyle Street, between 350 and 400 meals were prepared and packaged with drinks and dessert into white plastic bags that said ‘Thank you’.

Hamilton planned to eat his away from the blustery core and said, for him, the gesture is more than just a warm meal.

“A lot of us get slipped right through the cracks. So, unfortunately, we just count on these little things to keep our mental sanity”, said Hamilton, who wished everyone a happy Thanksgiving and walked away.