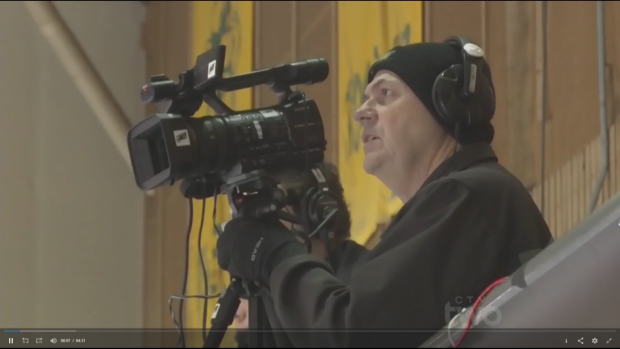 EDMONTON — Two people killed in a crash north of Edmonton Thanksgiving weekend have been identified as Rob and Grace Zittlau, well known figures in the local amateur sports community.

RCMP say the collision happened on Oct. 11 sometime before 5 p.m. at the intersection of Highways 651 and 803, east of Legal.

Despite help from witnesses, two adults in a southbound car on Highway 803 died on scene, while two children from that vehicle were taken to hospital. The current condition of the six-year-old girl and four-year-old boy is unknown.

A driver and passenger in the eastbound SUV on Highway 651 sustained what police called non-life threatening injuries.

The Zittlaus were identified as the victims by friends, family and organizations Rob worked with through his video production company, ICU Video Productions.

Rob started the company in 1989 to provide local teams with professional-quality game footage.

It is with great sadness Football Alberta announces the passing of one of our own – Rob Zittlau, our football guy!
••
Zittlau and his wife Grace were involved in a fatal car accident on Oct. 10, 2020.
••
Pls head over to our FB & IG platforms for our tribute.
••#football pic.twitter.com/ThEX4rtdJP

He also worked as an editor with CFRN and CTV National News.

Many have expressed their gratitude for his mentorship and thoughtfulness.

Terribly saddened to learn of the passing of Rob Zittlau and his wonderful wife Grace. It was a privilege to work with and become friends with Rob over the last year. His passion and love for broadcasting and local amateur sports is unparalleled. He will be dearly missed.

Rob Zittlau saw a need that existed for athletes, coaches and fans at all levels of sport, and he filled it with incredible energy and commitment. Worked hard, treated his subjects and his contacts in and out of the media with humor and dignity.

So awful. I’m still in disbelief

Rob Zittlau was my “go-to” guy for the past 15yrs – my dedicated, honest, funny, amazing work partner during countless media training sessions for our clients.

He was also a huge part of the #yegmedia family

Shocked and saddened by the passing of @icuvideoltd Founder and Producer, Rob Zittlau, and his wife, Grace, over the weekend. Sending love and comfort to the family.

Thankful for everything Rob did for me and many other broadcasters in the city, both on-air and behind the camera pic.twitter.com/z438rETJBk

Mounties continue to investigate the crash. .

The crash was one of 207 throughout the entire province over the holiday weekend.

Police say a total of five people were killed.