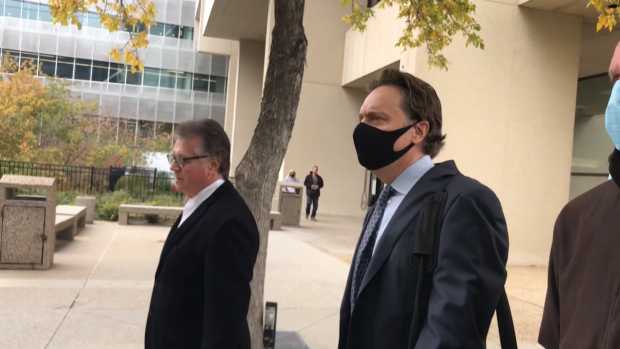 EDMONTON — An Edmonton man is facing three-and-a-half years in prison after drunkenly driving and killing a teen two years ago.

Appearing in court for sentencing on Wednesday, Shane Stevenson’s counsel and the Crown made the joint submission, also requesting a driving prohibition against the suspended Dentons lawyer.

Stevenson, dressed in jeans, a sport coat and a black mask, listened as family and friends of Chloe Wiwchar described life without her.

“The moment I was told my daughter was dead, I began living in a different world,” Holly Lucier said to Stevenson.

“My daughter was my whole world.”

Lucier told court she has been unable to return to work and lives under a fog of mental illness.

Her ex, Chloe’s father, she said, has been “broken.”

“He hasn’t come back to his family… His wife, Christina, she’s living with a shadow of the man she married.”

Christina Wiwchar, Chloe’s step-mom, told Stevenson her husband had retreated from his family and hadn’t returned to work.

Her step-daughter’s death has also made her fear for her other kids’ safety: “I watch my kids like a hawk.”

On April 15, 2018, an off-duty officer witnessed Wiwchar being struck by a truck, which he followed when its driver fled the scene.

Stevenson was found behind the wheel and arrested in an alley in the area.

Wiwchar was a Grade 11 student at the Victoria School of Performing and Visual Arts.

She was rushed to hospital, but couldn’t be saved.

“What really guts me to the core is how you just left her there to die alone,” Chloe’s aunt Tracy Stinson told Stevenson.

“You are the biggest coward ever.”

The teen’s grandmother added, “These past two-and-a-half years have been so painful.”

“I think about her every day and I wonder what she would be doing now,” Aila McGie.