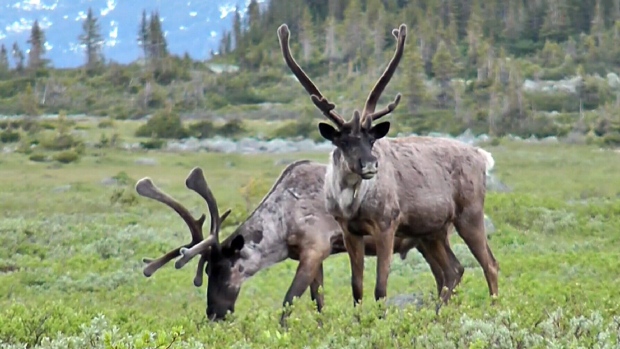 “We are watching an extinction process right before our eyes,” said Carolyn Campbell, AWA conservation specialist.

“The Maligne caribou population has just been declared extirpated, but Tonquin and Brazeau aren’t far behind. That means they’re winking out.”

Parks Canada’s website says the Tonquin herd is estimated to have 45 caribou and the Brazeau herd has fewer than 15. Neither herd has enough female caribou to be able to grow the herds. The A La Peche herd is a partially migratory herd of about 150 animals on Jasper National Park’s northern boundary, primarily managed and monitored by the province.

“We’re calling for more access measures to support Jasper National Park’s caribou survival and re-occupancy because the range area they’re now in and using is a lot smaller and they aren’t in some of the prime areas anymore, such as Maligne,” Campbell said.

She said habitat in national parks is really valuable because of the intense economic and recreational pressures outside the park.

“Current trails and snow compaction needs to be looked at,” she said. “That’s recognizing that there have been some limits implemented since 2014, but declining numbers suggest that more needs to be done.”

One specific area AWA is calling to be closed is Marmot Basin’s Tres Hombres ski run, which opened in 2018. Campbell said Parks Canada approved the ski run even though it was inconsistent with the Tonquin Caribou Risk Assessment Final Report published in 2014, which states that the run affects Whistlers Creek caribou habitat.

AWA also wants to reduce Tonquin backcountry trail and lodging impacts that limit caribou range use and survival, noting “backcountry trails and lodgings are currently open from mid-February to mid-October in prime caribou calving, summer, and winter habitat, and should be re-assessed”.

“It sends a message that the federal government takes caribou protection seriously,” she said.

“That may make the difference whether mountain caribou survive.”

The regeneration of caribou herds is up to individuals too, Campbell said.

She said, “We – humans – can manage our recreation desires to align with sensitive wildlife survival. They cannot. It doesn’t work the other way around.

“The idea of people connecting with nature is important. It has to include respecting caribou range.”

Parks Canada outlined on their website that caribou are both an indicator species (they reveal a lot about the health of the alpine and forest ecosystems) and an umbrella species (by protecting caribou many other species that have the same habitat needs are protected).

And in Jasper National Parks’s 2019 annual report, it was stated that wolf density is low in the park, indicating that conditions for caribou survival and recovery are improving.

It goes on to say that Parks continues to monitor ecological conditions in caribou habitat for all its herds, and is investigating several options to increase the small caribou herds in the park, including exploring the feasibility of a conservation breeding program.