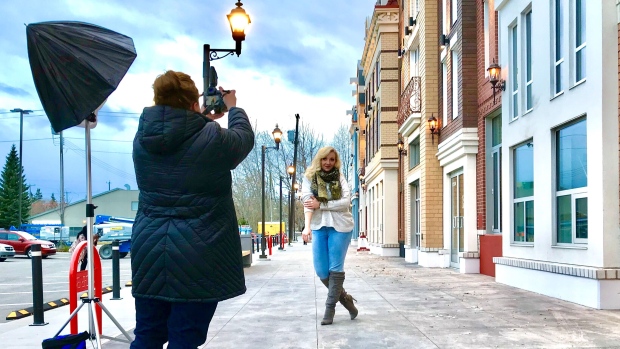 EDMONTON — Edmonton has a popular new strip mall, but no one is going for the shopping.

Manchester Square isn’t open yet, but its unique European-inspired design is already attracting a steady stream of photographers, models and selfie-takers.

“It’s really cute and quaint and Edmonton doesn’t have anything like it. So it’s a fun place,” aspiring model Vanessa Pearson told CTV News Edmonton in the middle of a chilly October photo shoot Wednesday.

Manchester’s design attracted criticism in May, with some online calling the design “fake” and “tacky” suggesting it was out of place in central Edmonton.

“It’s not a tacky place. Everything isn’t for everybody. If you don’t like it you can just shut up about it. If you like it you can enjoy it. We don’t have to be so negative all the time,” Chukwuka Kalu said.

Kalu and his friend Comfort Sorinolu were two of more than a dozen people holding informal photo shoots at the site Wednesday afternoon.

“It’s kinda like travelling without leaving your own neighbourhood,” Kalu said, adding his photos were for fun and Instagram.

“I like the lights. It’s just a great spot to come with your friends and take some nice photos,” amateur photographer Comfort Sorinolu said.

The 57,000 square foot development, located on the corner of 107 Avenue and 120 Street, used to be a furniture warehouse.

The developer of the site told CTV News Edmonton in May that he’s not fazed by the criticism.

“Everyone has a right to have comments. And if they don’t want to be here, they don’t have to be,” said Anton Morgulis, CEO of 76 Group.

Several European countries served as inspiration for the design, including Italy, France and The Netherlands, and Morgulis said the unique style cost about twice as much as a standard retail facade.

Despite the critics, people at the site Wednesday were already enjoying Manchester Square for what it is.

“We’re not in Europe, so obviously it’s fake, and we don’t have this aesthetic everywhere else…but I think it’s really cute,” Pearson said.

Manchester Square has room for 19 businesses. So far the development’s website shows three spaces leased, one of the to local company Arcadia Brewing.

The development website does not say when the first business will be open.​