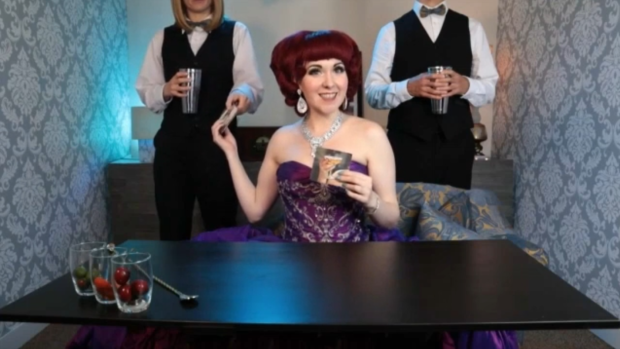 EDMONTON — Carisa Hendrix, who performs under the stage name Lucy Darling, is having a magical career.

The Calgary-based artist was just named stage Magician of the Year at the world-famous Magic Castle, won the Allan Slaight Canadian Rising Star award, and performed on the TV show Penn and Teller: Fool Us.

But now with COVID-19 putting a world tour on hold, Hendrix is back in Alberta, where she’s created an online show with comedy, magic, dance and improv.

Hendrix and her co-stars Miranda Allen and Richard Lee His decided to push the boundaries of what could be done in a show watched over Zoom.

“The creation process of this show has been a little insane,” says Hendrix.

An Exceptional Night In With Lucy Darling is different than anything that’s out there on Zoom, with thousands of dollars invested in a set, lighting, and audio visual equipment.

“A lot of people from Broadway and a lot of theatre companies have come to see our show to learn how we’re using the medium.”

“We did our very best to run our show to run quick, really fun to make you feel like you had a real night out.”

“When you’re doing magic in a room in a theatre there’s always a question of ‘Is that person in on it?”, but if you’re in a whole other house the magic so much more powerful because I can’t come anywhere near you,” says Hendrix.

An Exceptional Night In with Lucy Darling runs Friday and Saturday online, with tickets available on the Citadel Theatre’s website.