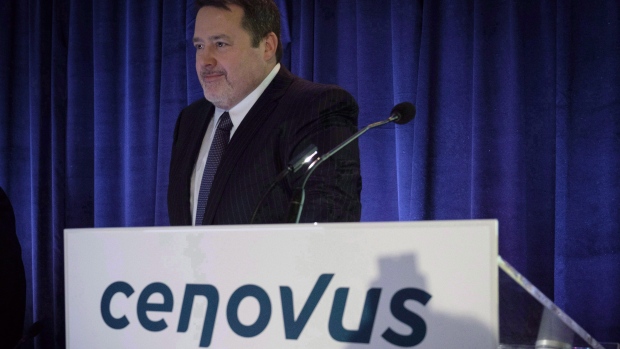 The merged Cenovus Energy Inc. will remain headquartered in Alberta. The deal would combine the companies into a new integrated oil and gas business with increased and more stable cash flows, the statement said.

“We will be a leaner, stronger and more integrated company, exceptionally well-suited to weather the current environment and be a strong Canadian energy leader in the years ahead,” Pourbaix said in the statement. “The diverse portfolio will enable us to deliver stable cash flow through price cycles, while focusing capital on the highest-return assets and opportunities. The combined company will also have an efficient cost structure and ample liquidity.”

The deal is the latest sign of consolidation in an energy sector that has been battered by the twin crises of the COVID-19-related economic slowdown and low crude oil prices.

Last Monday, ConocoPhillips announced it would buy shale producer Concho Resources in a deal valued at $9.7 billion that would create one of the largest U.S. oil producers.

Earlier in the month, one analyst pointed to the acquisition of a 17.6 per cent stake in Calgary oil and gas producer NuVista Energy Ltd. by rival Paramount Resources Ltd. as part of a trend toward “forced” consolidation in the troubled Canadian energy sector.

News of the Cenovus-Husky deal follows a Friday announcement from Alberta’s government that the province would end its oil curtailment quotas, a temporary measure intended to support oil prices. Spokespeople for both companies said Friday they welcomed the move. Indeed, Cenovus had already been producing above its curtailment levels with credits purchased from other companies.

Combining the companies will create annual savings of $1.2 billion, largely achieved within the first year and independent of commodity prices, the companies said.

“Bringing our talented people and complementary assets together will enable us to deliver the full potential of this resilient new company,” Husky CEO Rob Peabody said in the statement. “The integration of Cenovus’s best-in-class in situ oil sands assets with Husky’s extensive North American upgrading, refining and transportation network … will create a low-cost competitor and support long-term value creation.”

The combined company will be the third largest Canadian oil and natural gas producer, based on total company production, Cenovus said. It will have low exposure to oilsands benchmark crude, which typically trades at a discount to North American benchmark West Texas intermediate.

The transaction has been approved by both boards and is expected to close in the first quarter of 2021, pending shareholder and regulatory approvals.

This report by The Canadian Press was first published Oct. 25, 2020.