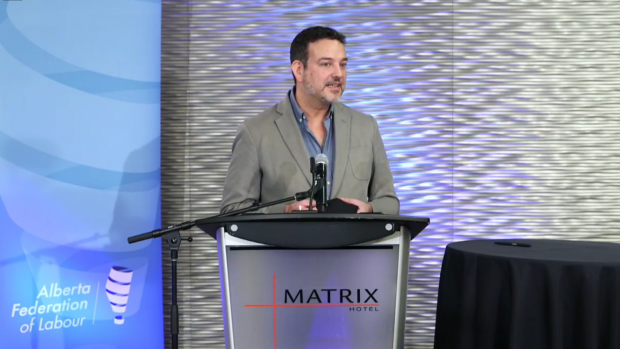 EDMONTON — Labour-union leaders are urging Albertans to sign up to protest Premier Jason Kenney’s government through rallies and demonstrations and, if necessary, provincewide general strikes.

McGowan appeared at a news conference at an Edmonton hotel Wednesday morning and was flanked by other union leaders as they launched a website called standuptokenney.ca.

The site asks Albertans to promise to take part in protests and makes a list of 12 demands of the provincial government, including ending “the war on doctors,” rescinding a plan to lay off as many as 11,000 laundry, lab and food services health workers, and take a second COVID-19 wave more seriously.

“So we’re stepping up to the plate and we’re saying to all of those Albertans who are calling out for some kind of organized extra-parliamentary protest, that we will put our resources, our skills, our tools, our abilities at their disposal.”

Hundreds of health support staff walked out on Monday over the government’s plans to cut jobs and privatize some services at hospitals.

The workers returned to their jobs on Tuesday after the Alberta Labour Relations Board deemed their action illegal, but some surgeries had to be cancelled and rescheduled.

McGowan says the one-day protest showed that mass action can be effective, but that what he was proposing Wednesday wasn’t a strike or protest as defined by the bargaining process.

“If there are strikes in the context of bargaining, they would be in addition to and separate from what we’re announcing today.”

House Leader Minister Jason Nixon was expected to respond to the AFL-led campaign before question period.

On Tuesday, the provincial government said it respected the rights of unions to express opinions, but would not tolerate illegal strikes “and will use all available legal mechanisms to respond as needed.”

The Alberta Federation of Labour, United Nurses of Alberta, Health Sciences Association of Alberta, Canadian Union of Public Employees Alberta, and U of A Non-Academic Staff Association were all participants in the conference.

This report by The Canadian Press was first published Oct. 28, 2020.