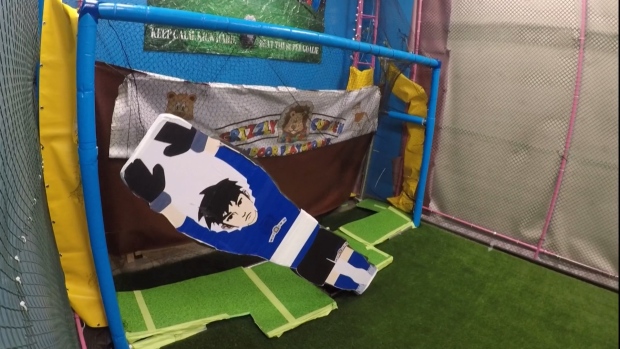 EDMONTON — A goalkeeper in Leduc is one of the fastest in the world, but there’s more to him than meets the eye.

His reflexes are quick as lightning, and he never gets tired. He’s also a robot.

Grizzly Cubs Den Indoor Play and Cafe in Leduc is home to Zippy, a robotic soccer goalkeeper. And he moves fast.

“Three hundred kilometres an hour at least,” said Grizzly manager Greg Moreside. “He is the fastest goalie I think in the world right now.”

The robotic system was made in Germany, and uses a mix of sensors and cameras equipped with different modes ranging from pro to beginner.

Players from the Southwest Sting Soccer Club tried to score on him Friday.

“When I first looked at him I thought he was going to be cardboard thing you could break but it’s not that easy,” said one teammate.

“It’s a good tool to teach the kids how to aim the ball and this a great competition,” said Coach Matic. “Zippy is humbling. Zippy is very, very humbling.”