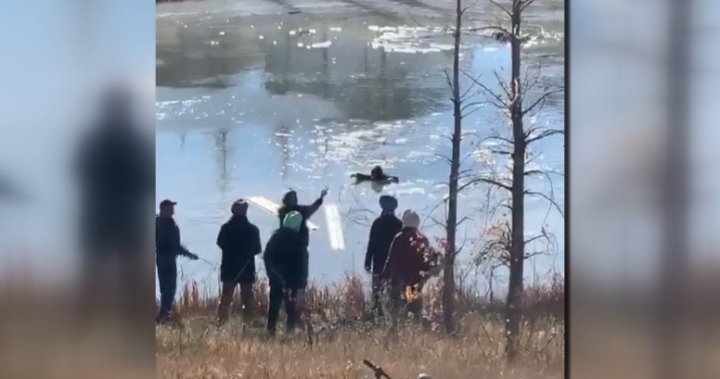 It was a scary couple of minutes for two girls who fell through the ice of a stormwater pond in northeast Calgary on Friday morning.

Community members who were walking near the pond quickly jumped into action to help save them, and neighbour Kulninder Bangar caught it all on video.

EMS said they were called out to a drainage pond near 60 Street and 88 Avenue N.E. around 11:30 a.m. for reports that two young teenage girls had fallen through the ice.

Bangar said her daughter had called her out onto her porch which faces the pond and could see the two girls partially submerged in the pond and calling for help.

“The screams were like a deathly scream,” said Bangar. “It was so terrifying, it’s hard to erase.”

The video shows several older neighbours jumping into action, first trying to use siding from a nearby renovation project to reach one of the girls.

But when that didn’t work, Bangar said the men started unravelling their turbans and tying the pieces of cloth together to make a rope.

“In their Sikh faith it’s a big thing to take your turban off but they didn’t think for one moment,” said Bangar.

“They just thought of saving her life.”

Bangar said after several tries with the turban rope, another neighbour brought out a garden hose which made it easier to pull the girl to safety.

“It was quite a terrifying experience, but at the same time it was a wonderful experience to see these elderly citizens [who] went out of their way to help these young ladies,” said Bangar.

The second girl was pulled to shore by another passerby.

Stuart Brideaux with Calgary EMS said that the quick work from neighbours helped shorten the time they were in the water.

“It did have a positive ending. Other than being cold and some mild hypothermia, there were no ill effects or lasting repercussions from this incident,” said Brideaux.

He added that neither of the girls needed to be transported to the hospital and both left with their parents.

As temperatures start to drop across the province, Brideaux said it’s important to remember that venturing onto the ice is never safe.

“It’s always advisable that you stay on the banks or well away from [the ice],” said Brideaux. “It’s not possible to tell the thickness of any ice in terms of what’s safe or not.”

Several members of the community said they plan on asking the city to put up a fence around the pond, but Bangar said education and signage is just as important.

“I really think that parents and families should be more aware of protecting your children, no matter which area you live in [whether you have] ponds or lakes,” said Bangar.

She hopes others learn from what happened in order to make the community a safer place.