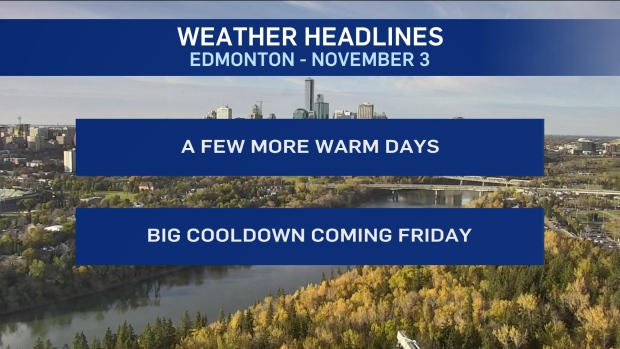 EDMONTON — Temperatures hit record-setting levels in a number of areas around Alberta Monday.

No record was set for downtown Edmonton (we would’ve needed to hit 22 degrees).

But, EIA hit a new record high.  I’ll put out a full list of those records later today.

Parts of southern Alberta could be in line to set some more records today.

The northern half of the province will be warm, but not quite record-setting.

Daytime highs will be in the 5 to 10 degree range across northern AB with a few showers in the NW this morning and the NE this afternoon.

Snowfall Warnings are in effect for the High Level and Fort Chipewyan areas with 10-15 cm expected tonight.

Cloudy with occasional sunny breaks and light wind in the Edmonton area today.

Temperatures will top out somewhere in the 12 to 15 degree range. Just a slight risk of a brief, scattered shower late this afternoon.

We’ll stay warm through Wed/Thu and THEN some colder air spills in from the north.

Daytime highs drop to the -2 to -5 range for Fri/Sat/Sun with a chance of snow on Saturday.