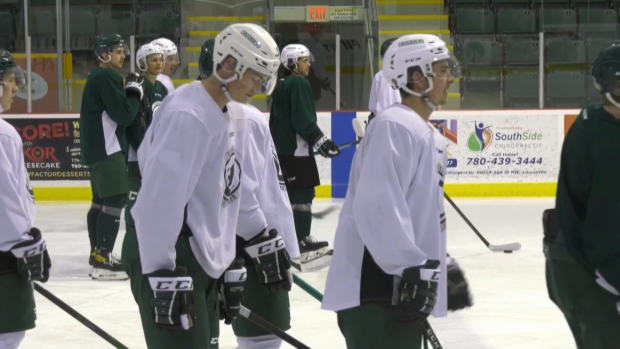 EDMONTON — It’s a date that usually creates a certain amount of dread: Friday the 13th. But not if you’re playing in the Alberta Junior Hockey League.

That’s the day the league will begin the regular season after an eight-month layoff.

“I gave the good news to our guys and there was probably one of the loudest cheers I’ve heard in a while,” said Spruce Grove Saints general manager Rob Sklaruk.

The league received approval from Alberta Health Services after staging an exhibition season for several weeks.

Teams will play in cohorts, only playing games within their division. There is no season-end date and a playoff format will be announced later.

As of Tuesday, clubs were preparing to see the same faces more often than usual.

“We already had it against Drayton Valley. We played five games against them in a row, so those games got pretty gritty.”

Although the AJHL depends on ticket sales, only 100 fans will be allowed to attend games. Teams have to get creative in generating revenue; the Saints will depend on their players now more than ever to help fundraising efforts.

“We’re doing things away involving our guys and our coaches to help drive finances into our bank account,” Sklaruk told CTV news.

Despite the AJHL’s revival, there are concerns that some of the league’s teams may not survive “return to play” during the pandemic.

“I am a little bit worried about maybe some other organizations in the AJHL,” Sklaruk said.

“But once we get through this year, I think it will be a big plus for us.”