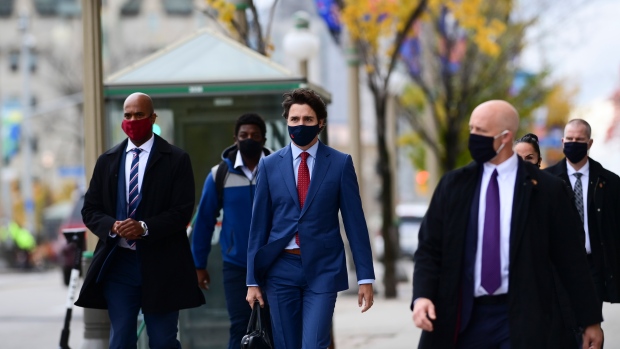 As ballots continue to be tallied in what’s turned out to be a very tight race between President Donald Trump and Democratic presidential candidate Joe Biden, Trudeau says Canada is keeping a close eye on the political uncertainty that Americans are waking up to.

“As everyone knows, there is an electoral process underway in the United States. We of course are following it carefully and will continue to as the day, and days, unfold,” Trudeau told reporters on his way into West Block on Wednesday morning.

Trudeau did not speak about Trump’s false claim in the early-morning hours that in his view he has won, calling for counting to stop and threatening to contest the outcome at the United States Supreme Court.

Beating Trump to the microphone in the early morning hours, Biden said he believes the Democrats are “on track to win this election,” and called for patience to allow the democratic process unfold.

With a record number of advance votes and mail-in ballots cast due to the COVID-19 pandemic, votes are still being counted in some key states where Trump and Biden are neck-and-neck.

In the weeks leading up to election day, Trudeau and his cabinet have been restrained in their comments about the state of the race and potential economic and policy implications for Canada.

Trudeau and Deputy Prime Minister Chrystia Freeland have vowed repeatedly to work with whomever wins and have sought to assure Canadians that the federal government has a series of contingency response plans at the ready for any outcome, including in the event of civil unrest.

On his way in to a caucus meeting Wednesday morning, Conservative Leader Erin O’Toole refrained from commenting until the results are complete.

Bloc Quebecois Leader Yves-Francois Blanchet said Trudeau is obligated to stay out of internal American political affairs, though as the leader of a one-province party he doesn’t feel the same responsibility.

After saying earlier in the week that he thinks it would be in the best interest of both Americans and Canadians if Trump lost, Blanchet told reporters on Wednesday morning that if he was a Democrat “I would be asking myself ‘What did we do wrong?’”

“How come the American people support so much a man who openly lies, avoids paying his taxes, carries and shares prejudice against so many people? Why do the American people still support so strongly that man is a question that he does not have to ask himself. He’s faring very well. The Democrats, the media, the institutions should ask themselves this troubling question,” Blanchet said.