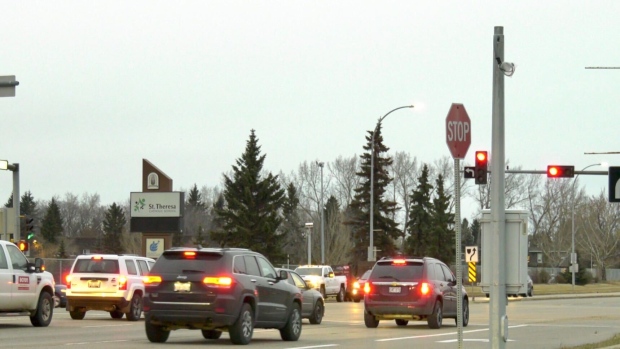 A second Intersection Safety Device (ISD) was shot and disabled at Wye Road and Brentwood Blvd on Oct. 24 at approximately 1:00 a.m., said police.

“We will keep this investigation active until we determine who is responsible,” said Supt. Dave Kalist, Officer in Charge of the Strathcona County RCMP.

“We are relieved that no one was injured as a result of discharging a firearm in our community,” he added.

Both devices were inspected after the company that operates the ISDs reported problems to police. RCMP determined the devices were shot.

“The targeted destruction of these ISD is a public safety concern, as these intersections are located in both residential and high traffic area,” said RCMP in a release.

Police say they use the ISDs to monitor and photograph drivers that speed or run red lights.

The devices are proven to reduce red light running and speeding which police say reduces the severity of crashes.