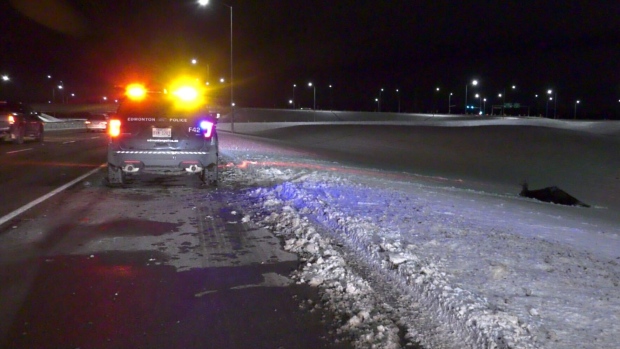 EDMONTON — class=”p3″ style=”margin:0cm;margin-bottom:.0001pt”> A moose was euthanized on the side of Anthony Henday Drive Monday night after it was seriously injured in a collision with the driver of a sedan.

It happened around 5:30 p.m. on the north Henday eastbound near the 127 Street overpass.

The moose laid injured in the south ditch, about the distance of a football field behind the damaged car.

An Edmonton Police officer shot the moose with a service carbine rifle three separate times – for a total of five shots.

He told CTV News Edmonton he needed to make sure it was dead.

The driver was not injured but said she was in shock. The car was seriously damaged and had a smashed in front windshield.

Traffic was slow in the area but both lanes of the Henday remained open.