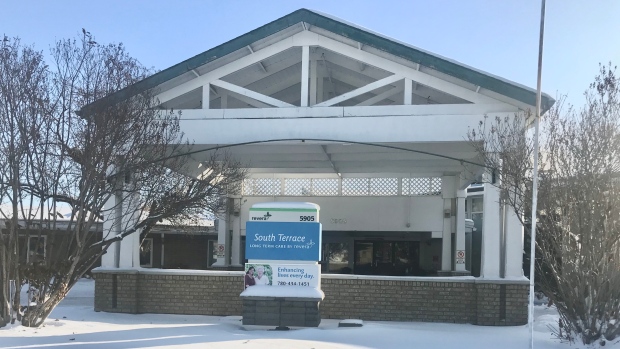 EDMONTON — A long-term care facility on the south side has now become Edmonton’s largest outbreak during the COVID-19 pandemic.

The family of 82-year-old resident Patricia Brine, who tested positive for the virus, feel the COVID-19 numbers at the private South Terrace Facility are spiraling out of control.

Janice Quinn and John Brine now can only stand outside of their mother’s room at the long-term care facility.

“She sounds like she’s got bronchitis, but she’s never had a fever so we’re just hoping for the best right now,” said Quinn.

Their mother is now one of dozens in an outbreak that has seen 146 cases — 76 residents and 70 staff — since Oct. 22. Ten residents have died.

Revera, a company that has seen widespread COVID-19 outbreaks at their facilities across the country, says in an update that South Terrace employees have been hit hard as well.

“AHS has confirmed that 70 staff members have tested positive for COVID-19 and remain at home in self-isolation,” says a company statement.

Alberta Health Services confirmed to CTV News Edmonton that it has had to bring in workers to bolster the staffing shortfall.

Patricia’s son John was eventually allowed in to see his mother — because it was his birthday.

“At least able to visit my mom once since September, that was the best birthday gift I could have hoped for today,” said Brine.

The siblings confirm Revera has updated them many times since the first case in late October, but they agree their mother’s spirits are very low. She was brought into the facility after suffering a stroke. They hope she can continue her fight against the virus.

“We pray for her and hope for the best, and the staff are doing their best to keep everyone safe and well and free from the COVID, but you know things have spiraled out of control.”