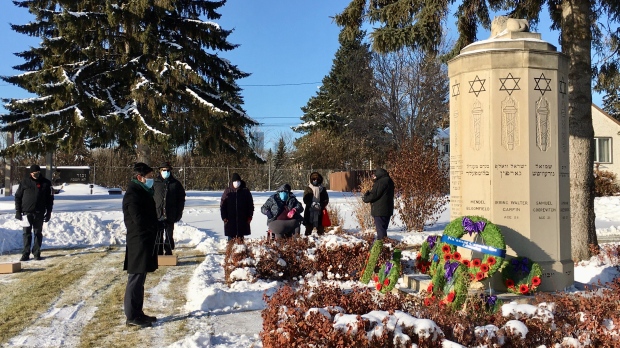 The Jewish Federation of Edmonton has honoured veterans serving in both world wars since 1946.

Eleven members of the local Jewish community were killed during the Second World War. They are commemorated on a cenotaph at the Edmonton Jewish Cemetery where 13 Jewish organizations braved the cold weather to lay wreaths and to remember on Nov. 11.

“We had a lot of veterans of the Jewish faith in both World Wars and many other wars, but especially World War II. We were fighting the Nazi regime,” said Debby Shoctor with the Jewish Federation of Edmonton. “So many people died in the Holocaust. Six million people of the Jewish faith, so that’s why we think it’s important to commemorate this day.”

Ken Wasserman now chairs the Remembrance Day Committee his dad started on behalf of B’nai Brith in 1946. It has run every year since.

“My dad had close friends and one day you see them and one day you don’t,” Wasserman said. “These things are important because these people gave their lives to serve our country and that’s certainly something to recognize annually.”

Two rabbis were on hand to give prayers and a Jewish bugler who’s a member of the military played the Last Post.

This year’s service included physical distancing measures such as spacing out the wreaths and wearing masks.