An Ottawa man convicted of trying to join ISIS has been granted overnight privileges after telling the Parole Board of Canada he wanted to visit a ski resort with his girlfriend.

Carlos Larmond had been required to spend nights at a halfway house following his release from prison last year, but the Parole Board agreed to lift the requirement.

In its decision, the Parole Board said Larmond had “developed a new relationship,” and was engaged to be married following several visits with the woman.

“You have indicated a desire to spend more time with her on her next visit, and also to perhaps do some skiing in the mountains this winter,” according to a copy of the decision obtained by Global News.

“That would mean you would have to travel by bus, and therefore, spend overnight at the ski resort.”

The Board approved the change to his release conditions. The decision did not explain why it was not possible for him to ski during the day and still return to his half-way house at night.

The ski resort in question was not named in the document but the a public version of the decision was released on Tuesday by the Parole Board office in Edmonton.

Larmond is reportedly living in Calgary. Ski hills in nearby Banff have opened for the season, with COVID-19 safety measures in place.

“At a time when businesses are being shuttered by COVID and Trudeau is urging provinces not to reopen, terrorists are being let out of jail to go to ski resorts,” said Conservative leader Erin O’Toole.

The office of Public Safety Minister Bill Blair said it could not comment on specific cases but that “Canadians can be assured that our agencies work tirelessly to keep them safe.”

“The Parole Board is independent, and their decisions are not subject to political direction. They are made independently by the Board according to specific, longstanding criteria set out in the Corrections and Conditional Release Act.”

Less than a year ago, the Parole Board ordered Larmond to live at a half-way house on the grounds that he posed an “undue risk to society.”

At the time, he was refused overnight leave privileges because of his “need for constant close monitoring.”

The potential dangers posed by terrorism offenders have become a concern internationally following attacks by suspects who had been released from prison although they were still radicalized.

In Vienna, a 20-year-old released from prison on parole last December after he was caught trying to join ISIS killed four and wounded more than 20 on Nov. 3.

Larmond, 29, was arrested in Montreal in January 2015 as he was leaving for Syria to join ISIS. In August 2016, he was sentenced to seven years. He was also convicted of threatening.

“Early in your sentence, you were transferred to the Special Handling Unit (SHU) as it was alleged you were attempting to radicalize other offenders,” the Parole Board wrote in its Nov. 2019 decision.

As he neared statutory release, when offenders are released after two-thirds of their sentence, the Parole Board imposed 11 conditions on him, including that he live at a halfway house.

He was also required to return there nightly and undergo treatment for radicalization. His social media use was also restricted. 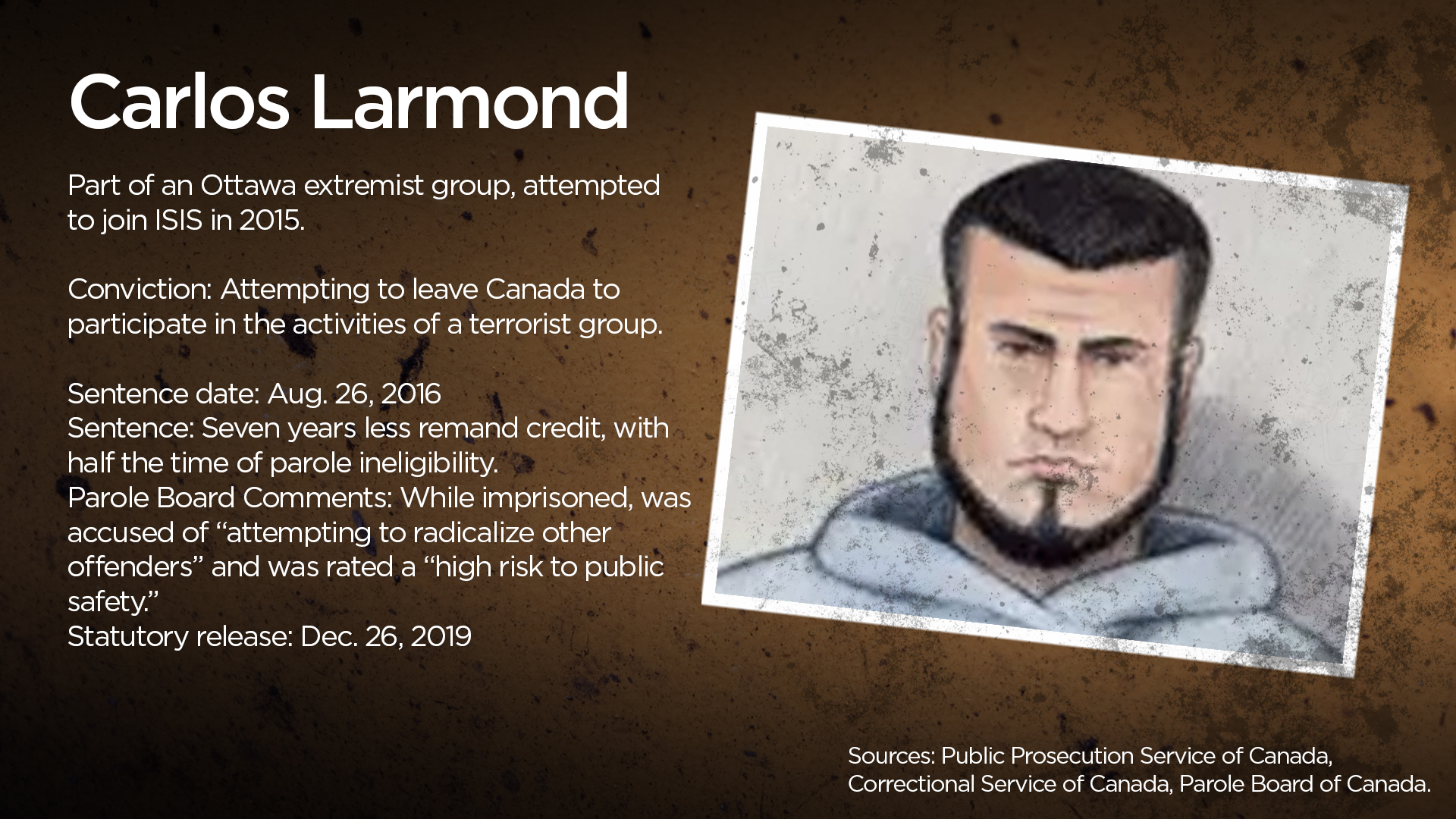 “Your file indicates a rapid descent into radical behavior, which motivated your involvement in terrorist activities,” the Board wrote in its most recent decision.

But it said there was “no indication in your file that this kind of terrorist behavior has continued,” and the Correctional Service of Canada (CSC) supported his request for overnight privileges.

“Mr. Larmond, all reports indicate you have been complying with your conditions of release, and have caused no problems at the CRF [community-based residential facility],” the Board wrote in its decision.

“You have developed a positive relationship, and you are requesting a chance to further demonstrate credibility to the Board and your CMT [case management team].”

“You will continue to be carefully supervised by both CSC and the CRF. The Board is of the opinion that you have demonstrated over 10 months of stability in the community, and overnight leave is therefore granted.”

The other 10 conditions remain in place.