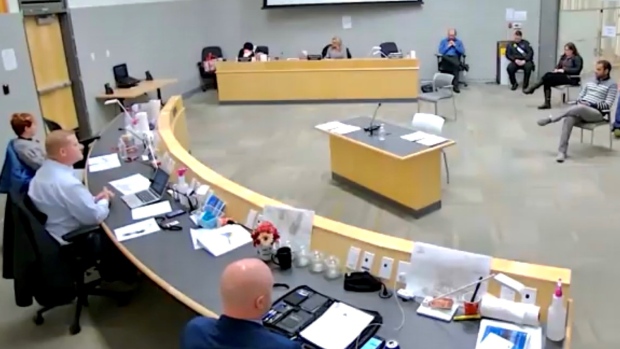 EDMONTON — A northern Alberta town councillor who sparked a local economic boycott over comments a nearby First Nation labelled “cruel, callous and racist,” began a public meeting with a tearful apology Tuesday.

On Sept 8, councillor Joy McGregor said Slave Lake needed to “stop feeding” and “stop being so nice” to homeless people – instead saying the goal should be to get them back to the Indigenous communities they came from.

“I want to start by apologizing directly to the First Nations of Loon River, Whitefish, Atikameg, Peerless, Trout and the community of Wabasca,” McGregor said Tuesday in council chambers.

“To go a step further though, I recognize my comments have hurt Indigenous people and communities near and far,” she said.

Driftpile Cree Nation issued a press release Sunday denouncing McGregor’s September statements and the Chief of that community called on his members to stop shopping in Slave Lake until an apology was received.

McGregor did not address the boycott or Driftpile Cree Nation specifically on Tuesday and neither did Mayor Tyler Warman.

Warman said he’s been in contact with nearby Sawridge First Nation and Treaty 8 First Nations for help to educate council and work towards reconciliation.

“Racism exists within the world and we have never been oblivious to the fact that it exists in this community. But after deeper reflection and analyzing what we have said, or did not say, the intent of what we meant to say does not matter. It only matters what is heard,” Warman said.

“We as a council have to own that we are now part of that (racism) problem. I have to acknowledge that I am part of that problem,” he confessed.

In a press conference Monday, Warman repeatedly refused to say if McGregor’s comments were racist or not.

Instead he called them “unacceptable” and McGregor did the same on Tuesday.

“I acknowledge that racism exists in the world and Slave Lake is no exception. Although never my intention, my comments have been labelled as this and after reflection, I acknowledge my statements were unacceptable,” McGregor said.

Driftpile Cree Nation Chief Dwayne Laboucan said he had not yet heard the apologies when CTV News Edmonton reached him Tuesday night, but said he would watch them.

Meanwhile, the issue of how to help homeless people in Slave Lake is undecided.

A rezoning application that would have seen the Slave Lake Native Friendship Centre create more temporary shelter spaces was denied by council earlier this month.

Warman said stats need to be gathered on the number of people experiencing homelessness so council and the local Native Friendship Centre can work together to find a solution.