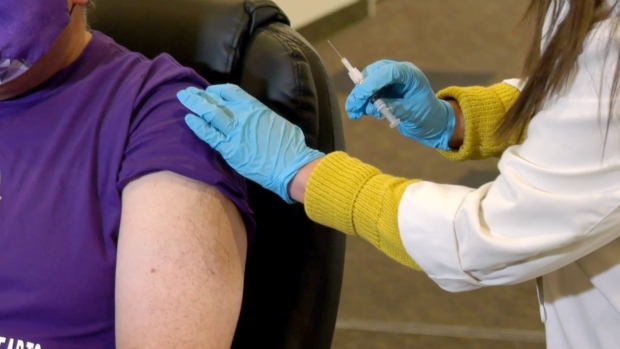 CALGARY — More than 1.1 million Albertans have received a flu shot in the last month-and-a-half, which is nearly as many as the entire 2019 flu season, which saw 1.4 million doses given.

Data released by Alberta Health Services says 1,142,419 flu vaccines have been given since the program began on Sept. 27.

Calgary Mayor Naheed Nenshi received his flu shot on Thursday and encouraged others to do the same.

“It’s quick, it’s painless … you can get it at any pharmacy or your doctor’s office and it’s just the right thing to do to protect yourself and your community,” he said.

The flu shot will be available across the province for anyone age five and up free of charge, and Albertans are able to receive a high-dose vaccine at an additional cost.

The high-dose vaccine is being made available to residents of long-term care facilities at no cost.

Alberta Health Services (AHS) is also offering immunizations by appointment for those under five years old and those in their household.

Information on the flu vaccine can be found online.

Over 25% of Albertans are now immunized against influenza – an increase of over 22% (205,744 more doses) compared to this time last year.

Thanks for doing your part for #ABFluShot2020. It’s a simple action that protects you and those around you, especially during #COVID19AB. 1/2 pic.twitter.com/jwstMz7Uou