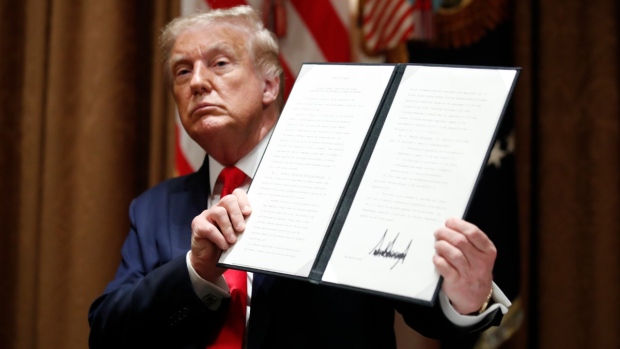 TORONTO — When U.S. President Donald Trump vacates the White House, he may be vulnerable to a number of investigations and possible charges for any criminal acts he may have committed while in office, and even before.

At the federal level, Trump could be open to obstruction of justice charges when he is no longer the president, relating to the investigation by special counsel Robert Mueller into Russian interference in the 2016 election.

There are also allegations of potential tax fraud and campaign finance law violations that are federal offences Trump could face after he is no longer a sitting president.

While Trump has enjoyed the legal protections afforded to a sitting president, when Democratic president-elect Joe Biden takes over on Jan. 20, he may have to finally face some of these ongoing investigations.

Until that time, however, Trump retains all of his presidential authority, including the ability to issue pardons. So, how can the president use his pardoning power to help himself before he’s confronted with these potential legal challenges?

ARE THERE LIMITS TO PARDONING POWER?

According to Article II, Section 2, of the U.S. Constitution, the president has the power to “grant reprieves and pardons for offenses against the United States, except in cases of impeachment.”

This means the commander-in-chief can unilaterally forgive someone for their crime, or commute or reduce their sentence after they have been convicted.

That’s why pardons are often considered one of the most powerful and sweeping tools in the commander-in-chief’s tool belt.

Graham Dodds, who grew up in the U.S. and is a Concordia University professor of political science specializing in American politics, said there are very few restraints on the president’s pardoning power.

“It’s one of the few presidential powers that’s really [not very] constrained. Courts or Congress can’t do much about it,” he told CTVNews.ca during a telephone interview from Montreal on Wednesday.

That’s not to say, however, there aren’t any limitations.

Dodds explained that while Trump is free to pardon anyone he pleases, including his own family and inner circle, for any crime that’s been committed while he’s in office, this only applies to federal offences. Or to return to the aforementioned section from the U.S. Constitution, “offences against the United States.”

This means that offences that violate state law, such as those being investigated by Manhattan District Attorney Cyrus Vance Jr. in New York against Trump, cannot be forgiven with a presidential pardon.

Another limitation of a presidential pardon is that it can’t be used in cases of impeachment, meaning the president cannot use a pardon to undo an impeachment by the House or an impeachment conviction by the Senate.

CAN THE PRESIDENT ISSUE PRE-EMPTIVE PARDONS?

One of the reasons why a presidential pardon is so valuable is that it can be used to forgive someone for a federal offence, even if charges haven’t actually been laid.

According to an 1866 U.S. Supreme Court ruling, the president’s pardon power “extends to every offence known to the law, and may be exercised at any time after its commission, either before legal proceedings are taken, or during their pendency, or after conviction and judgment.”

David Dyzenhaus, a law professor at the University of Toronto, explained that the president’s power to pre-emptively pardon someone means that person is forgiven for any crime that may have been committed during the time set out in the pardon.

“The president can pardon people for offences that no one has yet to allege,” he said during a telephone interview with CTVNews.ca on Wednesday.

As for how long the clemency lasts, Dyzenhaus said it’s indefinite.

“A pardon is forever,” he said.

COULD TRUMP PARDON HIMSELF?

Although the president can pardon anyone for a federal offence, it’s decidedly less clear whether he can grant clemency to himself.

“It’s an open question,” Dodds said. “The constitution doesn’t clearly say yes or no, there don’t seem to be binding court cases that say yes or no.”

Because no president has tried to pardon himself before, the courts have not weighed in on the constitutionality of such a move.

However, Dodds said if Trump were to try and pardon himself, it would likely generate a court case that would force the U.S. Supreme Court to weigh in.

“It goes against the basic idea that you should not be a judge in your own case, which is the kind of basic idea behind most law and this would obviously violate that,” he said.

Dyzenhaus agreed that if the president were allowed to pardon himself, it would mean that he is above the law.

“It’s so against what we might think of as unwritten principles of the rule of law of constitutionalism,” he said.

COULD THE VICE-PRESIDENT PARDON TRUMP?

Trump’s legal challenges have led some to wonder if he might resign before Biden’s inauguration so that Vice-President Mike Pence could pardon him. If that were to happen, Dodds said it wouldn’t be the first time in American history a vice-president pardoned his predecessor.

In 1974, President Gerald Ford famously pardoned disgraced former president Richard Nixon after his resignation due to the Watergate scandal.

“The pardon was for any offences Nixon may have committed, so ‘Not saying you did anything wrong, but if you did, you’re OK,'” Dodds said.

If Trump wanted to avoid any legal ramifications after his time in office, he would have time to resign and be pardoned by Pence before Biden’s inauguration, Dodds said.

COULD BIDEN PARDON TRUMP WHEN HE TAKES OFFICE?

Besides a last-minute pardon by Pence if he were to briefly assume the presidency, Trump could also be forgiven by Biden.

While that may seem like a long shot, Dodds said Ford pardoned Nixon in order to move the country forward and away from the all-consuming Watergate scandal. Although he would likely face heavy criticism, Dodds said there could be the possibility of a pardon from Biden.

“He would get a lot of criticism, at least from Democrats and from Republicans who would say ‘Hey, he didn’t do anything wrong’ and Trump might even protest that way so would it be politically controversial? Yes. Over the long term, would it help to put Trump behind the country? I don’t know,” he said.

Dyzenhaus, on the other hand, said he’s not sure Biden will be keen to pardon Trump in light of the president’s behaviour in the aftermath of the election and his refusal to accept the results.

“I don’t think there’s going to be much generosity of spirit when it comes to Trump after his time in office,” he said.

Instead of pardoning him, Dyzenhaus suggested the Democrats might prefer just to stop pursuing legal charges against Trump after his presidency so they can focus on the future.

“I think people will want to go after him, but it just might mean that you give him and his base more oxygen,” he said. “It might be the case that Democrats would prefer Trump just to go away and not to keep him in the news by pursuing him through criminal charges.”

With files from CNN and The Associated Press