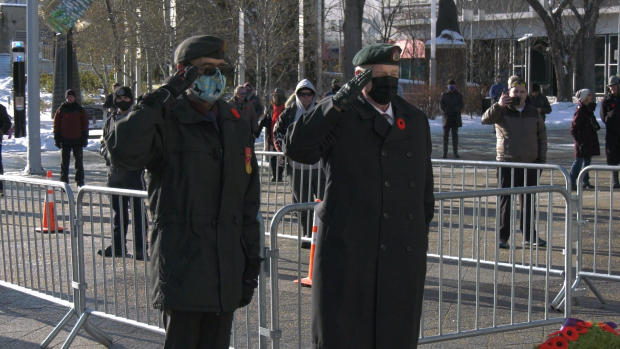 EDMONTON — It was a different scene from any in recent memory at Edmonton’s City Hall Cenotaph this Remembrance Day, as dozens turned up to pay their respects to soldiers from wars past.

Physical distancing protocols were in place amid COVID-19. There were no speeches, no bugle and no official program.

Still, those who gathered said it was no less important than previous years to observe the day of remembrance.

“It is different but in a way, you’re still remembering,” said Cpl. (Ret’d) Gord Walker from the Loyal Edmonton Regiment.

One man told CTV News Edmonton that he has been bringing his homemade wreaths to the cenotaph every year for the last 20 to honour his late father who fought in the Second World War.

“Because they went out,” the man said. “When the last enemy was all over the world, they came out and fought. So we’re coming out for him today and the rest of them. The ones that didn’t make it home.”

“Even though we can’t meet as a crowd, we can come and have our silence here,” another woman told CTV News Edmonton.

In the absence of any formal ceremonies in Edmonton this year, the city encouraged Edmontonians to mark this Remembrance Day in their own meaningful way.

City officials suggested people still wanting to pay tribute to Canadian troops could do so by visiting a cenotaph or cemetery, or take some time to learn about Canada’s military history.

“I’ve been a part of this ceremony for many, many years and I was concerned that that we might not be able to carry on,” Edmonton Mayor Don Iveson told CTV News Edmonton. “But we found a way safely outside.”