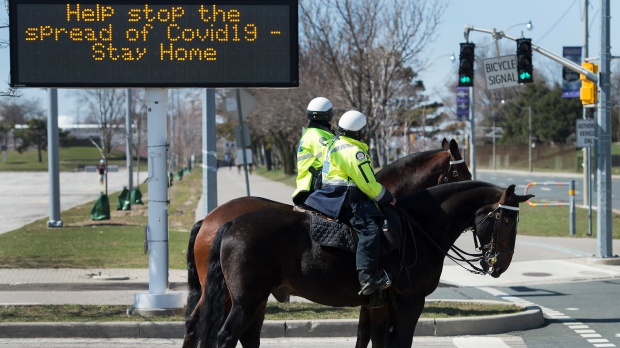 TORONTO — After health officials recorded more than 20,000 new cases of COVID-19 across Canada this week, one health expert is imploring governments to stop “asking nicely” and enforce health measures.

“At this point in time, I think we need to get our bylaw officers out,” said CTV News’ infectious disease specialist Dr. Abdu Sharkawy on CTV’s Your Morning.

“The time for asking nicely has passed. There’s simply too much at stake. There are too many lives that have already been lost and too many more that lie in waiting.”

The country surpassed 10,000 deaths from COVID-19 less than three weeks ago. Since then, officials have recorded more than 800 additional deaths and over 60,000 more cases.

As the second wave surges, the question of what needs to be done and by whom remains. Prime Minister Justin Trudeau said Friday that all Canadians must do their part and that the federal government’s job is to support the premiers of the provinces and territories as they make decisions. But its resources have limits.

“We all have to be vigilant in every part of daily life and in every part of the community. I reassured the premiers [during a conference call] that the federal government will always be there to help, but reminded them as well that our resources are not infinite,” he said in Ottawa on Friday.

“We want COVID to be done, but it’s not done with us yet.”

Though it’s unclear to infectious disease expert Dr. Isaac Bogoch whether the federal government should be taking a more “hands-on” approach with each province, rather than a supportive one. Trudeau’s government has poured a lot of money into recovery. On Friday, Trudeau announced that the government would invest an additional $1.5 billion for skills training among people who have lost jobs during the pandemic.

But moving forward and stopping the second wave of COVID-19 may depend on provinces, territories and municipalities, where there have been clear breakdowns in policy, said Bogoch.

“Many people are talking about the federal government taking over and using this Emergency Measures Act to take control. Certainly, the pros of that would be maybe a more homogenous plan across the country,” he told CTV News Channel on Friday. “It’s pretty clear that they don’t have that capacity. You really need the provinces to do something like that.”

The Canadian Medical Association said Friday that the provinces must step up as it is the federal government’s job to be “rallying and supporting” the provinces and territories.

“It is the provinces who have to deliver health care to Canadians,” said Ann Collins, CMA president, on CTV News Channel.

“Action needs to be taken soon, or this will just become more frightening.”

Should the action be legislated lockdowns? Bogoch believes there’s no need for anything to be enacted into law at a federal or provincial level. Instead, Canadians should be able to act on their own accord.

“We have to do our own lockdown. We have to be responsible for our own safety, our own families, our own communities,” he said.

To make it simple, Sharkawy said Canadians should not be gathering with anyone outside of their nuclear household. If they don’t stay in your home, you shouldn’t be engaging with them socially, no matter the occasion, he added.

Furthermore, Sharkawy implored leaders of communities, cultural organizations and faith groups to educate their communities and discourage social gatherings at homes, in churches, and events like weddings.

“You can call it authoritarian, you can call it dictatorial. The fact of the matter is, there’s no more room right now for a balanced approach. It’s simply too late,” he said.

Many have contested that, as businesses continue to face closures and major financial losses nine months into the pandemic, health precautions to stop the spread of COVID-19 should be matched with economic recovery measures and the reopening of businesses. In Ontario, Premier Doug Ford has insisted that the province apply a “balanced approach” that weighs both reopening of the economy with health and safety risks.

Sharkawy said he “vehemently” disagrees with Ford’s strategy, saying that that approach will actually put more business owners out.

“We have to stop this false dichotomy that we can either save the economy or keep people alive,” he said. More financial relief should be provided by policy makers and elected officials to help small businesses make it through, he added.

“We’re in a situation here where we’re dealing with a forest fire and instead of telling people we need to evacuate to safety and give you some shelter, we’re pulling out garden hoses. It’s time for the water bombers. It’s time to take this very seriously,” he said.