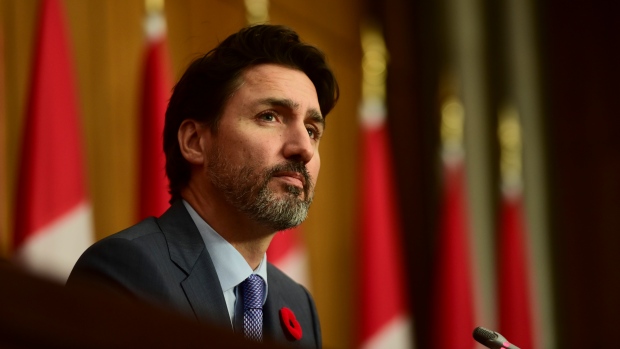 OTTAWA — Prime Minister Justin Trudeau will continue today to prod premiers towards more stringent measures to curb the spread of COVID-19, even as he offers up more federal funding to help provinces retrain workers left jobless by the pandemic.

Trudeau is expected to announce hundreds of millions of dollars more for provinces to plow into skills training, on top of some $3.5 billion in previously announced funding.

But he’s also expected to renew his call for premiers to impose the restrictions necessary to douse the wildfire spread of COVID-19 and not be deterred by the economic costs of shutting down businesses.

Trudeau took that message directly to premiers during a conference call Thursday evening.

A summary of the call issued by the Prime Minister’s Office, says Trudeau asked premiers to “identify their specific needs to protect the health and safety of Canadians and bring the virus under control in their jurisdictions.”

And he assured them the federal government will continue to provide them with assistance and “will do whatever it takes for as long as it takes to keep Canadians safe and supported.”

Federal officials, who spoke on condition of anonymity because they weren’t authorized to discuss the issue publicly, say Trudeau stressed that he’s not trying to tell premiers what to do or cast blame for the alarming surge in COVID-19 cases across the country.

Rather, he wanted to emphasize that the federal government has put in place billions worth of support programs to help individuals and businesses weather lockdowns — and stands ready to pour more money into the effort to get the second wave under control.

“With rising cases of COVID-19 here at home, there’s added pressure on all orders of government to keep people safe, and to protect jobs,” he told a news conference.

“But I would hope that no leader in our country is easing public health vigilance because they feel pressure not to shut down businesses or slow down our economy.

“… I’m imploring the premiers and our mayors to please do the right thing: Act now to protect public health. If you think something is missing in the support we’re offering for your citizens, tell us.”

That message did not sit well with all premiers. Saskatchewan’s Scott Moe said it was “extremely unhelpful” for the prime minister to frame the issue as a “false choice” between protecting Canadians’ health and protecting the economy.

Still, officials said Thursday’s conference call was collegial and constructive. The readout added that “all first ministers reiterated their support for the Team Canada approach to fighting COVID-19.”

This report by The Canadian Press was first published Nov. 13, 2020.