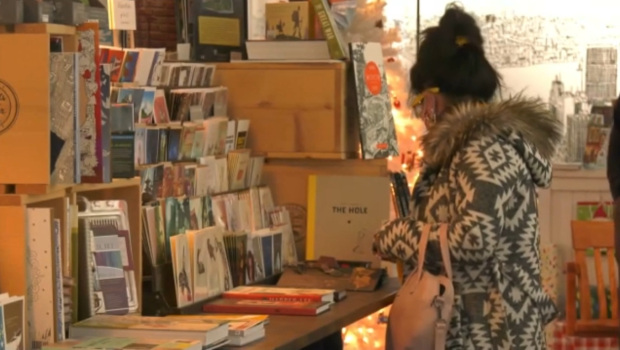 EDMONTON — The owner of the Prints and the Paper on 124th Street is happy to find out people are going to help take care of him.

“I will be adopted!” Sandy Muldrew said with a laugh.

The Prints and the Paper is one of 64 businesses in eight Edmonton neighbourhoods chosen to be part of #AdoptAShopYEG, an idea social media blogger Linda Hoang came up with to help support local stores and restaurants.

“I’m asking people to sign up and adopt these neighbourhoods, adopt these shops, and spend there,” said Hoang.

You adopt businesses by committing to spend $60 at shops in your chosen neighbourhood, and when you sign up, ATB is planning to surprise some participants with an extra $100 to spend. Hoang says the #AdoptAShopYEG is a program people have been encouraging her to organize for months.

“The funny thing is that you don’t have to have an initiative to sign up to support local, you can just go and support local, but people really like being a part of something,” she says.

Hoang found that out in July, after she posted on her social media channels that Yoshii Express on Whyte Avenue was struggling and could use some support. People responded by flocking to the restaurant.

“That gave me the idea to try this with more businesses and adopt a shop YEG expanded to neighbourhoods,” said Hoang.

Muldrew says initiatives like #AdoptAShopYEG not only will support businesses, it will also help entire communities because locally-owned shops make a community vibrant.

“I know so many people in the neighbourhood by their first name now, and I know their dog’s names because I allow dogs to come into the shop, so it just breathes life into the community.”

Hoang is hoping 200 people will sign up for #AdoptAShopYEG, which will mean $12,000 for local businesses. That could mean the difference between staying open and closing for some.

“If people stay home and don’t come out, little shops like mine are going to go by the wayside,” said Muldrew.

A list of shops and neighbourhoods taking part in #AdoptAShopYEG can be found online. Curbside pick-up and take out is encouraged at all of the establishments.