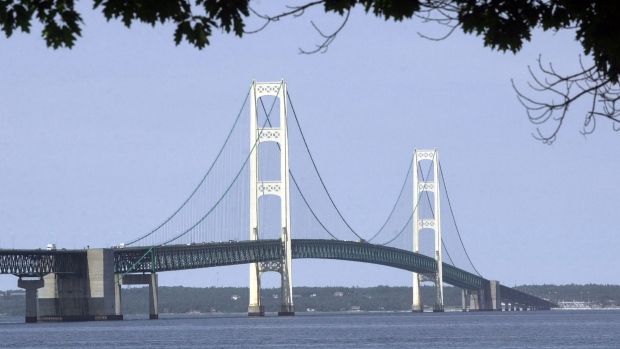 CALGARY — The Alberta government is not taking kindly to the latest attempt by Michigan’s governor to shut down Enbridge’s Line 5 pipeline.

Gov. Gretchen Witmer filed legal action Friday to force the closure of a pipeline, owned by the Calgary-based company that runs beneath the channel linking Lake Michigan and Lake Huron.

Witmer’s office told Enbridge it was revoking an easement granted in 1953 that allowed the company to build Line 5 through the Straits of Mackinac.

Its reasoning was that there was a pattern of non-compliance with conditions for safely operating the line on the part of Enbridge.

Michigan’s attorney general also filed a lawsuit to carry out Whitmer’s order to stop the flow of oil within 180 days.

Enbridge says there is “no credible basis” for the governor’s actions.

“This is just the latest development in longstanding efforts by Michigan’s executive branch against a vital energy corridor for the state,” she wrote in a statement Friday.

“Like so many regulatory matters concerning pipelines, it is expected that the latest move announced today will be headed to a long, protracted process in the American court system.”

Savage also said Line 5 has provided a majority of the propane needed to heat homes in the Upper Peninsula as well as providing neighbouring states, as well as the provinces of Ontario and Quebec, with safe, reliable energy.

“This project is a critical piece of infrastructure that is being made even safer through the Great Lakes Tunnel Project and can provide the energy still required for the coming decades.”

She also noted that the Michigan state legislature does not hold the same views on the project.

Earlier this week, Minnesota granted key permits and approvals for Enbridge to build a Line 3 pipeline replacement across the northern part of that state.

Line 3, which was built in the 1960s, runs from Alberta, across North Dakota and Minnesota to Enbridge’s terminal in Superior, Wis.

The company said in a statement that it recognized the conditions set out in the permit were “essential for protecting Minnesota’s sensitive streams and wild rice waters.”

(With files from The Associated Press)