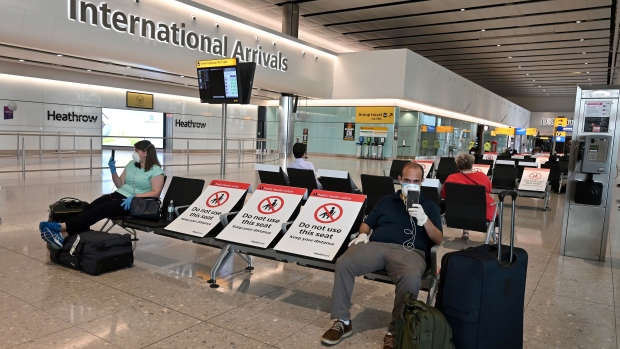 It was the good news that gave the world hope.

On Nov. 9 it was announced that one of the candidates for a COVID-19 vaccine, made by Pfizer and BioNTech, was over 90% effective in preventing volunteers from contracting the virus.

The beleaguered travel industry immediately got a boost, with airline and cruise company share prices rallying, and tour operators seeing upticks in searches and bookings for 2021. Finally, it feels as if vacations might be in our future.

But will travel post-vaccine go back to how things were, or has your vacation been irrevocably changed?

For starters, it’ll be a while before we know the answer to that, says travel specialist Dr Felicity Nicholson, lead doctor at Trailfinders Travel Clinic in the U.K.

“I think it’s just a matter of time before things come back to some degree of normality, but it’ll take quite a long time,” she says.

“At the moment, travel is way down the pecking order of vaccination.” She says that countries will first be looking to vaccinate the vulnerable, then healthworkers and keyworkers, before making inroads into the general population. That’s not to mention the practical issues around the transportation and storage of the Pfizer vaccination, meaning that if that’s the one that wins the race, it could take even longer to distribute.

“We should be encouraged but understand it’s unlikely to be as rapid as governments are suggesting,” she says.

“If they can find a way to transport it properly (it needs to be stored at minus 70 C, or minus 94 F), it could be early next year before things start to get going. Countries whose economies are based on tourism will be desperate to get people back and moving, but most people (in the travel industry) aren’t hopeful that things will really pick up until the fall of 2021.”

And don’t assume that once a vaccination program starts rolling out, you can jump on the next plane, whether or not you’ve had it. Nicholson reckons that proof of vaccination might become advisory, or even mandatory, for destinations.

An international certificate of vaccination or prophylaxis (ICVP) — which travelers must carry to enter certain countries which mandate a yellow fever vaccination, or to exit those with high polio risk — could be the next addition to your travel kit.

“I think we’ll have a formal certificate, either online or on paper, showing that you’ve been vaccinated at a recognized, accredited clinic, as we do for yellow fever,” she says.

“It’ll be the destination demanding it — and that could be everyone.

“Most countries where there’s a vulnerable or older population will certainly be demanding proof because we know how devastating the disease can be.”

MAKING UP FOR LOST TIME

So, you’ve had your jab, and are carrying your certificate — what next?

Well, you might be off on the trip of a lifetime, according to tour operators.

John Bevan, CEO of Dnata Travel Group, which owns brands Travelbag, Travel Republic and Netflights as well as trade brand Gold Medal, says that there’s been a noticeable uptick in bookings since news of the vaccine was announced.

And of those who can afford to go abroad next year, many are splashing out, he says, with the average booking value increasing by about 20% this week, compared to pre-COVID times. “People didn’t get a vacation this year, so they’re treating themselves. They’re booking higher category rooms, and we’re seeing more family groups, too,” he says. Netflights just took a booking for a group of 19 people to go to Dubai for Easter 2021.

“People have desperately missed the chance to travel, and want something to look forward to,” he says. “They’re saying, ‘That first trip, I’m going to make it special’.”

The demand for something out of the ordinary is so strong that in October the company launched a new lineup of once-in-a-lifetime trips, Journeys to Come — anything from seeing the solar eclipse in Patagonia to swimming with whales under the midnight sun in Iceland. “We wanted to create something to make people say, ‘That’ll get me through these challenging times’,” he says.

Interestingly, in what he thinks might be a “Biden bounce”, Bevan says his brands have seen a triple-digit growth in trips to the U.S. for next year, from May onwards. The Maldives and the UAE are other popular destinations for Europeans wanting to escape next year — he earmarks Dubai in particular as a destination that’s working hard to get tourists safely back, and also predicts the Caribbean will do very well.

However, he thinks Australia and New Zealand will be off-limits until the last quarter of 2021.

Marchant says his clients are starting to look towards Asia — although he thinks that the typical country-hopping trip through Southeast Asia will be off the cards for a while, because of the bureaucracy of testing and certificates at every border or on every flight.

“Instead of hopping around, I think people will just go to a couple of places and really immerse themselves, and I think that’s really positive,” he says. “There’ll be a shift in how people enjoy places — it won’t be just box-ticking anymore.”

For the same reason, he thinks that multiple weekend breaks will be replaced by longer, two-week trips.

However, it’s not all plain sailing yet. According to Nigel Vere Nicoll, president of the African Travel and Tourism Association (ATTA), the trade body for travel to sub-Saharan Africa, the biggest problem with travel in 2021 won’t have anything to do with a vaccine — it’ll be to do with flight availability.

This is particularly the case for this part of the continent, which has just three main international hubs: Addis Ababa, Nairobi and Johannesburg. South African Airways, based at the latter, are currently not flying, while Kenya Airways is hoping for a cash injection from the government. Ethiopian Airlines, however, is expanding.

“From there, you have to get an extra flight and domestic airlines have cut back,” says Vere Nicoll. “And airlines won’t increase flights unless they’re sure there’s enough business. It’ll take time but we have to support them.

“The vaccine is a very, very exciting step — the first brick in rebuilding everything — but I can’t see it rolling out until the middle of next year.” For what it’s worth, he doesn’t think African countries — which have emerged relatively unscathed by the pandemic — will mandate the vaccine for travelers.

Safari destinations have been particularly hard hit by the collapse of tourism, with poaching on the rise in national parks, and economic devastation for those working in lodges.

And “grossly unfair” travel bans from the likes of the U.K. government — who impose a two-week quarantine on travelers coming from any African country, most of which have seen under 1,000 deaths from the virus, compared to the U.K.’s 50,000 — haven’t helped.

And yet, Vere Nicoll says that the future could be bright for those looking for the holiday of a lifetime. “The Great Migration was better this year than it has been for years, and there are great initiatives going on — people have used this time to get tourism ready for when we come.” And, of course, a safari trip is largely outdoors.

CHAMPING AT THE BIT TO GET TO EUROPE

Are there any destinations which have been so marred by the virus that we won’t want to go there for a while?

Despite the U.S. heading up the league table of COVID-19 deaths, from John Bevan’s data it appears that visitors are keen to get there — he thinks that could be optimism regarding the Biden administration’s pledge to curb the virus.

But he warns that Europe, which has been in the center of the pandemic, may not be so attractive to travelers from countries who’ve controlled it better.

“The response to being told you can’t do something is to want to do it, so if you’ve not been to Europe for a year, you’ll want to go to Europe,” he says.

He says that tour operators are already looking at a relatively good year, with plenty of trips postponed from 2020 to 2021, and search engine data showing big interest in travel to Europe from other continents.

And with numbers not expected to recover until 2022, the continent will be emptier than it has been in many of our lifetimes.

However, he warns that “there’s no momentum in the market” — nobody traveling to Europe and inspiring people to follow them. Post-vaccine, it’ll all hinge on the airlines to lay on flights, and the destinations making sure they’re ready to go. “Cities bounce back fairly quickly but it may not be that straightforward,” he says.

Even with a potential vaccine, John Bevan thinks that the travel experience itself will have changed — particularly at the airport, where he thinks airlines will move to a largely touchless experience.

On board, he thinks the COVID-induced rule of deplaning row by row will continue — and that’s a great thing.

“I flew on EasyJet to Greece in August and it was immaculate — they made us stay seated till the row in front had got off, and there wasn’t that horrendous bunfight. It was so calming,” he says.

And at the other end, he thinks the restrictions on buffets, with staff doling out the food, will stay “till people feel more comfortable.” Ditto keeping our personal space — “I think we’ll be more careful for a long time,” he says. “I can’t see us hugging or shaking hands with people we don’t know for quite a while.”

FLEXIBILITY IS HERE TO STAY

One good thing to come out of the pandemic? Flexibility. Many deals on offer for 2021 are fully flexible, and it looks like that will continue, at least in the short to medium term.

“The industry has handled the refunds (from earlier in the pandemic) with various degrees of effectiveness, and I think the consumer is going to be far more mindful of what they’re booking and what they expect,” says Tom Marchant.

“Suppliers should be able to offer flexibility, and the customer will expect transparency.”

Under a new policy, Black Tomato is offering a full refund up to 30 days before departure on most new bookings — and although Marchant won’t be drawn on how long that’ll last, he says, “I don’t see it as a flash in the pan.”

Bevan agrees, and reckons flexibility is how the industry will recover. For the traveler, he says, the flexibility that airlines are currently offering means that there’s “not a huge amount of risk” for those wanting to book. His only caveat — he advises would-be travelers to book as soon as they see a deal with flexible terms, because airline capacity will still be low in 2021.

A WAKEUP CALL FOR US ALL

Dr Nicholson thinks that the resources poured into the vaccine effort will benefit the fight against other diseases — and predicts better vaccinations for viruses including Ebola.

And she thinks travelers’ own attitudes towards health while on the road will improve.

“People are much more aware of infectious diseases now,” she says, adding that, before the pandemic, the number of travelers who booked a pre-trip consultation was pretty low. “Before, they might have gone abroad without consulting anyone. (If the vaccine is mandatory) they’ll have to come in for a consultation and we can talk to them about other risks in that destination.

“In western countries, we tend to be cavalier, but perhaps people will respect how serious viruses can be now.

“Everyone’s had a wake-up call and learned about virology, and that can only help.”