Residents of a south Edmonton apartment building say they’ve been put in a situation where there are now hundreds of vehicles without spaces to park amid the winter snow-clearing season.

Those who live at the 24-floor Park Place Tower on 89 Avenue and 100 Street were given notice at the beginning of November that the 200-space parkade would be going under a construction period, starting Nov. 9.

While the company has provided about 40 stalls on top of the parkade on a “first come first serve” basis, that’s not enough for the hundreds of cars that need spaces.

That means many people are struggling to find a place for their car in the Old Strathcona neighbourhood, an area with limited street parking and numerous streets nearby that have been converted to one-way hybrid bike lanes.

Global News has agreed to only identify the residents who spoke out by first name, as they still live there and said they were worried about repercussions.

Ashleigh, who has lived at Park Place Tower for around four years, said the situation has created a feeling of anxiety as the winter season begins.

“Everybody has to be out of the parkade, and they have to find street parking for almost three months,” she said. “Our elevators have been out of service for almost two years.

“A lot of us tenants are worried in regards to having [the construction] complete on time.”

A letter sent to tenants last week from Boardwalk says the construction will take place from Nov. 9 followed by a “staggered re-opening” that will see some levels opened by Nov. 23 and others remaining under construction until Dec. 21.

Tenants also have the option of leaving their cars in the parkade, but won’t be able to use them if they do. 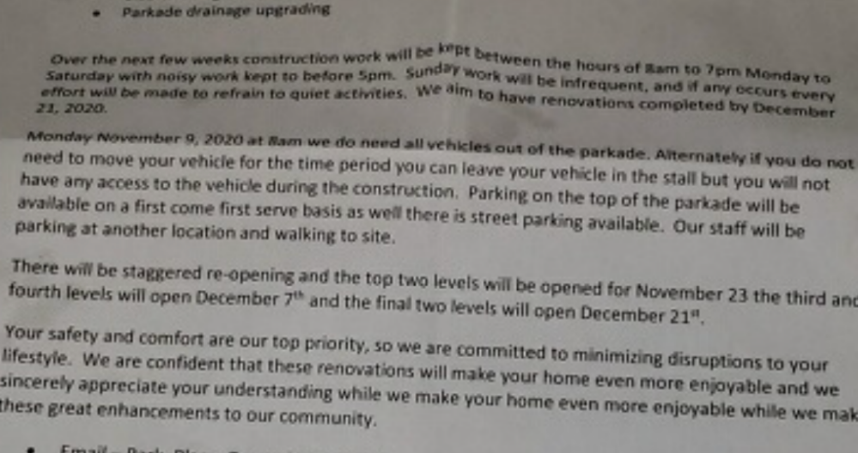 Ashleigh said she was able to work with Boardwalk to find a powered stall to use at another building, but added she was told there weren’t many others available like that for other tenants.

“People are worried about when it comes down to the roads having to be cleared out for snow, and having to park several blocks down… it’s going to be quite chaotic.

“We’ve got a lot of older people in this building,” she said.

“There was literally no remorse [from Boardwalk].”

The repairs were initially planned for the summer, but were rescheduled due to the COVID-19 pandemic.

A statement from Gagan Singh Bal, a community director for Boardwalk, said the repairs were pushed back after residents voiced concerns about their original schedule.

“We had originally scheduled to complete the necessary repairs to the parkade in August of this year; however, we had received feedback from our residents at Park Place Tower about the timing,” Singh Bal said in an emailed statement.

“We were asked to reschedule the start date of the repairs since many of our residents were working from home due to COVID-19 at the time.

“These repairs are necessary and must be completed before the frost and increased moisture that accompanies the Edmonton winters.”

He added the repairs are related to the drainage system in the parkade and their nature requires all the floors to be repaired at the same time.

Read more: Landlords are collecting too much personal info on renters: privacy commissioner

Kevin, another tenant of the building, said he and his wife haven’t been able to secure an alternative spot and will be relying on the “first come first serve” lot that’s been set up.

“They’re kicking everybody out of the underground, and basically have said ‘Here’s 40 places you can park,’ but there’s 200 parking stalls in the parkade. So that leaves three-quarters of us going, ‘What the hell are we going to do now?’

“Especially with the snow, and the snow-removal process with the parking bans. We’re concerned about using our car, period.”

Singh Bal said that Boardwalk had “attempted to temporarily secure parking for our residents nearby,” but that nearby lots they approached declined the requests.

He added the company has waived all parking rental charges for November and December for every resident through the construction period.

The city’s new parking ban plan may mean that there are times when cars cannot park on residential streets at all.

“It’s hard enough when you have a visitor come over to find a place to park out there,” Kevin said.

In Phase 1, city crews will clear arterial and collector roads, bus routes and business improvement areas and drivers can continue to park on residential streets.

When Phase 2 is implemented, drivers can park in their driveway, in a parking space on a neighbour’s property — with permission — or on any road cleared during Phase 1 where parking is normally allowed.

That means if Phase 2 is declared — most of the residential streets surrounding Park Place Tower would not be available for parking.

“If you go out, come back, you might have to park like ten blocks away,” Kevin said. “You might get your car broken into — it’s freezing cold.”

Sing Bal said the company is hoping to expedite the repairs.