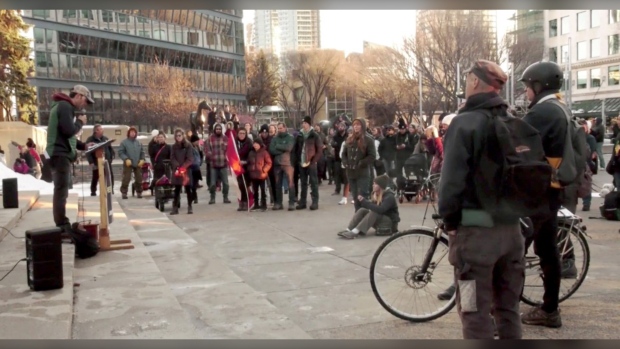 CALGARY — With COVID-19 case counts continuing to rise, provincial restrictions have been implemented but some health experts say the measures may not be enough.

Government officials have pushed an education message rather than enforcement, but Jenne believes it may be time to look at stricter penalties for those not following public health restrictions.

“It seems pretty clear that there has been fairly minimal penalty for not doing it,” he said.

“I think it becomes a self-fulfilling prophecy, that if there is no penalty for not following guidelines, then what’s the incentive to follow guidelines.”

Calgary police have issued 38 citations under the health act since the pandemic began.

Only six tickets have been issued to people not obeying the city’s mandatory mask bylaw, since it came into effect in August. Two of those have been this month.

Premier Jason Kenney said earlier this month, when restrictions on gathering sizes were introduced, the province will not use enforcement to gain compliance.

“We’re not going to send out police to monitor this, as much as what we’ve done this is appealing to people to exercise personal and collective responsibility,” Kenney said on Nov. 6.

Calgary Mayor Naheed Nenshi has asked the province if city bylaw officers can start issuing tickets to those they feel are grossly veering away from obeying public health guidelines.

The premier’s office said in a statement that Calgary police officers can enforce the Public Health Act.

“Bylaw officers can’t but they can inspect, educate, warn (ie point out specific infractions), and refer any matter to police for enforcement,” read the statement.

The city says that bylaw officers, however, can enforce the city’s mask bylaw, which calls for them to be worn at all public indoor locations, as well as while on Calgary Transit.

“Bylaw only has the authority to enforce the city’s mask bylaw, they do not do any enforcement for large gatherings,” read a statement from Kaila Lagran, a city of Calgary spokesperson.

During Monday’s regular update, Dr. Deena Hinshaw, the province’s chief medical officer of health, said she has sent a letter to Alberta police chiefs asking for help enforcing the rules.

“It is disappointing that there are those who think the health of our communities is being taken lightly and that these measures are not necessary,” she said, referring to ongoing protests, the latest which saw about 200 people march through downtown Calgary over the weekend.

“I have written a letter to police chiefs across the province asking for their help in enforcing the current measures and doing our best to step up the reinforcement of the importance of them.”

The maximum outdoor gathering size in Alberta remains 100 people and police say no tickets were issued or arrests made at the weekend rally.

Chestermere city council will deliberate on a mandatory mask bylaw on Tuesday, which would require residents to wear masks in all public facilities.

Lake Louise RCMP says some locals are not abiding by public health orders that include mandatory quarantine for someone who tests positive.

The detachment says fines of up to $1,000 are enforceable.

New restrictions were also introduced in Saskatchewan, which makes masks mandatory at indoor public locations in all communities with a population of more than 5,000.