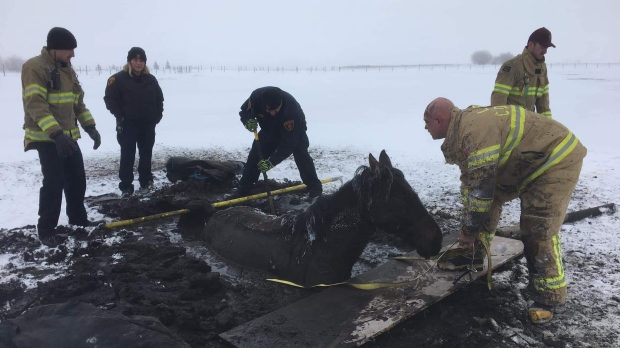 EDMONTON — A former jumping horse was rescued Monday morning after being trapped for several hours in a muddy hole at a Leduc County horse sanctuary.

After multiple unsuccessful attempts to free the 11-year-old male horse, Leduc RCMP called tow trucks in to pull the animal out.

“I thought I was gonna lose him.”

Before RCMP and the tow trucks arrived, Benkendorf and friends she called for help watched as the New Sarepta fire department failed to free the animal.

“When I called some of my friends, I was crying because the fire department had left.”

After Fysik was rescued, he was covered in blankets and rubbed down with the hope of bringing his body temperature back up.

“We have a flatbed tow truck here just in case he does not get up anytime soon that we will put him onto if need be and take him to the barn,” Anna Schneider, a friend of the sanctuary’s owner, told CTV News Edmonton.

She said Fysik is expected to recover.

“There’s a little bit of water on this pasture,” said Schneider. “But it probably didn’t freeze solid with our jumping temperatures constantly and he must have walked off into the field and just broke through.”

She was one of over a dozen people who came to the horse sanctuary after Benkendorf shared her animal’s plight on social media.

“It’s my birthday today, so quite a birthday surprise.”