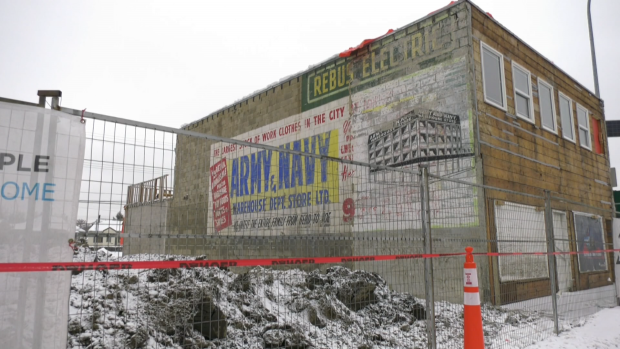 EDMONTON — What a coincidence that months after the pandemic forced western Canada’s Army & Navy chain to close in its 101st year, the store would see a brief resurrection in Edmonton.

Demolition on Fort Road near 127 Avenue NW has revealed a mural advertisement for the former department store, freshly surfaced with the teardown of a neighbouring building.

“The largest stock of work clothes in the city,” the ad reads.

“We outfit the entire family from head to toe.”

One of the chain’s remaining five stores was boarded up in Edmonton in the early months of the pandemic, exactly one year after the company celebrated its 100th birthday.

Samuel Cohen started the business in 1919 and grew it to nine stores and a mail-order operation.

The Whyte Avenue store survived until 2020, when the founder’s granddaughter and current president and CEO, Jacqui Cohen, announced the challenge of COVID-19 was “insurmountable.”

At the time, there was another store in Calgary and three in B.C.

Army & Navy’s resurrection in Edmonton will be short lived.

The building whose side bears the ad also faces demolition, along with other buildings on the Fort Road corridor.

The city is working to widen Fort Road to six lanes from Yellowhead Trail to 66 Street.

It is also building a new industrial collector road on 125 Avenue from 61 Street to 71 Street with a shared-use path.