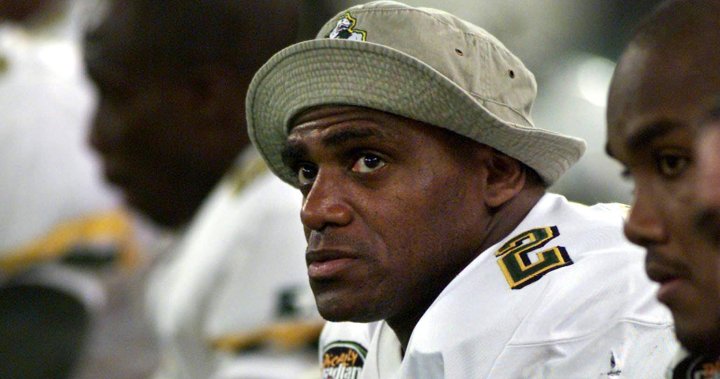 He’s the rare athlete who doesn’t need his full name to be identified. In fact, he doesn’t even need his real name.

Now 58 and and 20 years removed from his last CFL game, The Giz is still celebrated for his exciting kick returns and energetic personality. As we take you through Green and Gold Grey Cup Week on Inside Sports, Giz recapped his famous missed field goal return for a touchdown in 1987.

Going into the game, Giz was thinking more about what had happened the previous year.

“I remember we went there in 1986 and we lost the Grey Cup. That was my first championship. I kept thinking I wanted an opportunity to go play in that game again,” recalled Gizmo.

Late in the first quarter with the game tied 3-3, Toronto’s Lance Chomyc missed a field goal. Giz caught it five yards deep in the end zone. The first Argo in his way was Randy Ambrosie, now the commissioner of the CFL.

“I was thinking, ‘Ain’t no way in hell I’m going to let this lineman stop me,’” laughed Gizmo. “I gave him a little fake outside and I came back inside, and then I ripped back outside. From there, I had a wall of guys in front of me.”

The return is arguably the greatest play by an Edmonton player ever in the Grey Cup. He was finally tackled on the play, but only after he’d already crossed the Toronto goal line.

“Lance Chomyc caught me once he got to the end zone. After the game, he said, ‘Giz, I got you.’ I said, ‘Yeah, but I stopped running. I was tired.’”

Gizmo counts that play and a kick-off return for a score in the 1996 Grey Cup among his career highlights. But let’s face it, not everyone love the Giz, especially if he was burning your favourite team. He remembers facing some venom before a game in Regina.

“Damon Allen and I were warming up before the game. This little old lady behind the bench kept saying ‘Gizmo! Gizmo!’” he said.

Giz finally went over to the meet the elderly fan who told him exactly how she felt.

“She said, ‘You run a touchdown on this football field, I’m gonna beat the hell out of you with his cane!”

Williams, who now works as a personal trainer in Edmonton, still looks like he could play.

“I try to get more running in. I like my cardio more than anything. I’m not in there to try to lift the whole gym again,” said Giz. “I like to set up a program where I do circuit training. I do eight different exercises. It takes about 45-50 minutes. After that, I like to put in about 20 minutes of cardio.

“I still like my junk food sometimes. The main thing is I try not to eat too late at night, and I try to eat a lot of fruit and vegetables.”