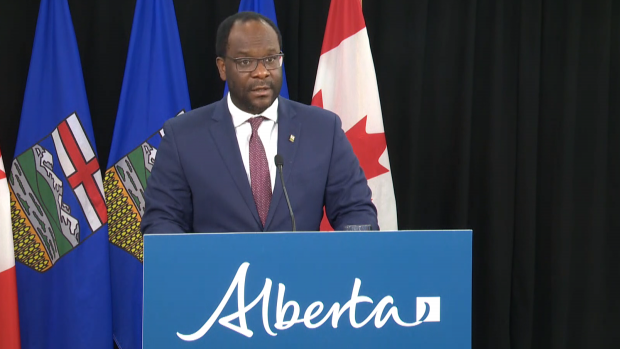 EDMONTON — Effective immediately, police in Alberta will no longer be able to ‘card’ members of the public, and must submit data on their use of street checks to the provincial government.

Solicitor General and Justice Minister Kaycee Madu made the announcement Thursday alongside the chiefs of some of the province’s largest police services.

“In theory, these practices are a useful tool through which police may garner intelligence on criminal activity and engage with the public. But in practice, we have heard they are often misused and arbitrarily target (and) racialize minority communities,” he said.

The minister said the purpose of a ban on carding – the practice of randomly obtaining personal and identifying information from members of the public – is to ensure consistent policy across the province.

Street checks, however, which is the police practice of stopping people and collecting their information purposely for an investigative reason, are legitimate and can be helpful to law enforcement, Madu said.

As such, the province will continue allowing the practice but require police agencies to review their own street check data quarterly and report to the province annually.

According to Madu, the changes come from the province hearing community concerns about systemic racism.

He started the conference by reiterating the government’s support for law enforcement amid calls to divert police funding to social services.

“You may have heard different buzz words lately, like ‘reallocating,’ but the goal is the same: pandering to the far-left ideology being pushed by radical activists,” Madu commented.

“Alberta’s government does not believe that the answer we are looking for comes from defunding the police. I have been as clear about that as I can be.”

However, he called Thursday’s announcement a symbol of his government’s dedication to restoring the relationship between police and the public.

“I’ve always believed that society can’t function without the rule of law, but in practical terms, the rule of law cannot exist if people do not trust the police.”

This is a developing story. Information will be updated as it becomes available.