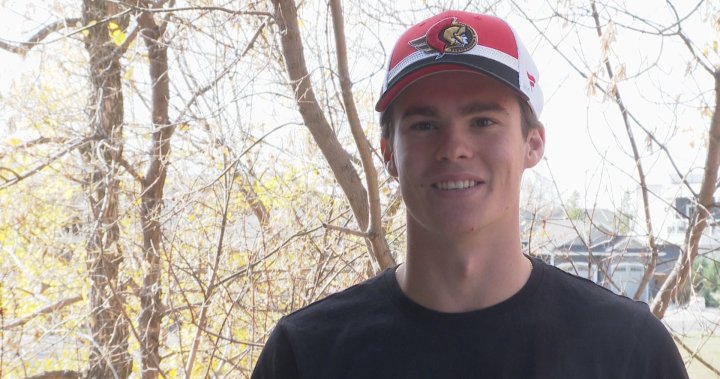 It probably isn’t the start Ridly Greig would have drawn up for his tryout for Hockey Canada’s World Junior Championship roster, but the 18-year-old says he feels “pretty much 100 per cent” despite a positive COVID-19 test result.

“I got tested on the 8th — Sunday there — and then I got the test back on the Thursday. A lady called me and told me I was positive,” Greig said.

TEAM CANADA EXCLUSIVE | With health and safety at the forefront, 46 players joined coaches and management to lay out plans and expectations for #WorldJuniors @SportChek Selection Camp in Red Deer. pic.twitter.com/RwQWttNm34

The Brandon Wheat Kings forward was taken in the first round of the 2020 NHL Entry Draft by the Ottawa Senators last month, and following the draft, the 18-year-old headed back to Manitoba to train. He said that’s where he came in contact with the novel coronavirus.

“I’m pretty sure I got it at an ice time in Brandon,” Greig said. “There was about four or five other guys that got it from the ice time, so I’m pretty positive that’s where it was from.”

Between that ice time and the positive test, Greig headed home to Lethbridge ahead of his scheduled trip up to Red Deer for Hockey Canada’s camp bubble, and ever since, the athlete has been isolating at home.

“I don’t have any symptoms or anything, so just quarantining right now,” Greig said. “The guys that I was in contact with kind of have the same as me, they don’t really have any symptoms — if they do, just like a runny nose for a couple of days — but nothing major.”

Greig said he’s using the time right now to work out in his parents’ garage, and stay sharp for when he’s given the green light to end isolation.

“Getting pretty bored here, pretty anxious to get going,” he said. “I get out of quarantine on the 20th, so I can get on the ice or get at least a couple days on the ice — get my feet under me a little bit — and prepare myself before I go to Red Deer.”

Read more: Lethbridge’s Ridly Greig ‘soaking it in’ after being selected by Senators in 1st round of NHL draft

Greig said he’s been in constant contact with Hockey Canada’s doctor in the bubble in Red Deer, and the plan is for him to enter the bubble on Nov. 22.

After narrowing down its roster, Hockey Canada will participate in pre-tournament games in the Edmonton bubble starting Dec. 20.

The 2021 IIHF World Junior Championship begins on Christmas Day and ends Jan. 5. Canada will begin its tournament schedule against Germany on Boxing Day.