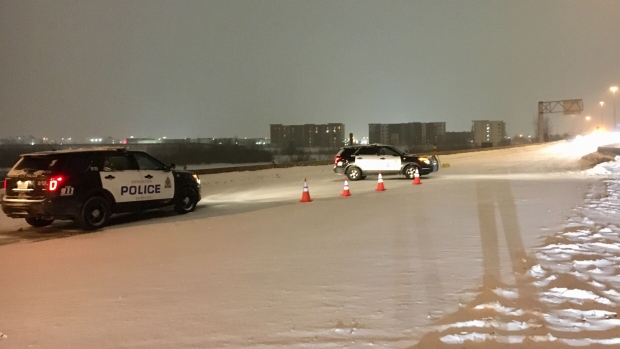 EDMONTON — The man who struck an officer with his vehicle on Whitemud Drive early Thursday morning died of a self-inflicted gunshot wound, police said.

According to the Edmonton Police Service, officers were managing traffic for an oversized load on Whitemud Drive when a vehicle drove through and struck an officer standing there.

The officer was taken to hospital with minor injuries.

Police pursued the vehicle, which came to a stop on 17 Street south of Anthony Henday Drive.

A man got out of the vehicle and shot himself, EPS said. He died in hospital.

A female passenger in the car was not hurt.

Police said the vehicle was stolen and had a stolen license plate.

ASIRT has been directed to investigate an incident involving @edmontonpolice that took place overnight on 17th St near Anthony Henday Dr. Details to follow.