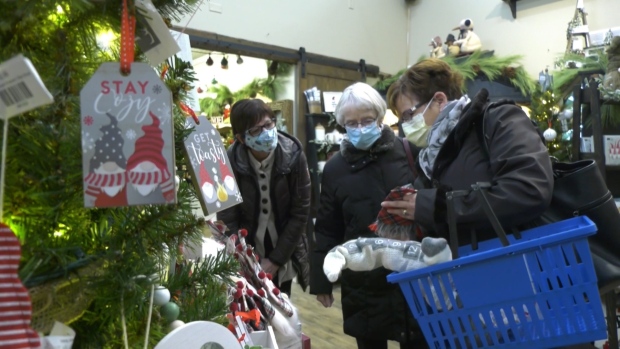 EDMONTON — Many are getting into the Christmas spirit early this year, but an Edmonton psychologist says gifts and decorations aren’t the only way people need to prepare.

While the Christmas season is always a busy time at Spruce Park Ranch Country Store, co-owner Karen Sievwright says this year is different. Customers have been ready and waiting for Christmas products since September.

“‘I need that décor.’ ‘I need to surround myself with happiness and things that make me feel good,'” she recalled hearing from customers.

Edmontonian Susan Tkachuk is getting a head start on her Christmas preparations, too.

“I don’t know — with everything going on now — how it’s all going to pan out, as far as getting together with family and that sort of thing,” she told CTV News Edmonton.

“(I’m) just trying to have something to be happy about.”

According to psychologist Dr. Ganz Ferrance, embracing the season this early can be of benefit.

“It’s a good way to adjust and help kind of balance things out for everything we’ve been dealing with. It gives us back a sense of we’re in charge of our lives and our experience a little bit, which is also a very good coping mechanism,” said Ferrance.

He says people also need to start thinking creatively about how they’ll connect with family if gatherings are not allowed.

“It is going to be different this year,” he said. “Start to make peace with that.”

Another Edmontonian, Diniz Rodrigues, has heard friends and family say they’re not in the holiday mood this year.

For 26 years he’s been adding to the display he sets up in his front yard. It has been Whoville themed for the last decade.

Rodrigues starts planning his display in summer and puts up his lights on the roof before Halloween. Then after Halloween, he goes all out.

“It takes about 40 to 60 hours worth of time to put it all together,” he told CTV News Edmonton.

He’s hoping to make the holidays a little brighter for his north Edmonton neighbours.

“I just wanted to bring a little cheer to people during this tough time.”